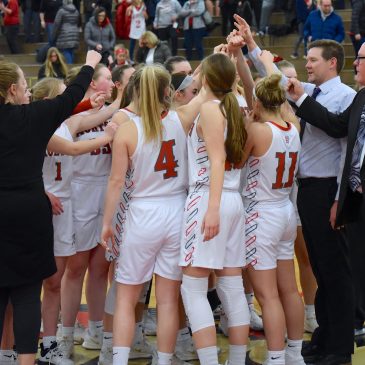 Oh, how I loved this. Katie Krupa with the ball. Low on the left side, a step outside the paint. Three steps later, she is across the paint and she is going up for what is an impossible shot that only a sophomore would even think might be a good idea. I mean, by now her back is to the basket. The rim is somewhere behind and above her. But she’s going up. And I’m here to say I’ve been bamboozled by the best of them, confused, hornswoggled and also dumbounded. But this. What IS she doing?

Krupa is moving the ball from her right hand to her left.

And with her left she puts the ball backwards over her head where it kisses the glass tenderly and falls in for two points.

It made the score 44-27 in the middle of a run that won it for Morton.

And before we get to the start of that run, let me ask a question.

What is it about Katie Krupa and Richwoods?

Three times last season, as a freshman, Krupa played her best games against the Potters’ greatest rival, including 21 points in a sectional championship game that was, for all intents and purposes, the real state championship game.

Tonight, she did it again.

Twenty-four points, 17 of them in the decisive second half.

All of them scored in the paint, all the result of tireless work for position on offense and rebounding, all of it done with Richwoods’ best hammering at her body and soul and doing nothing but causing her coach, Bob Becker, to call her “Katie ‘Sectional’ Krupa.”

“I don’t know what happens to me with Richwoods,” Krupa said afterwards.“But I like these high-pressure games.”

What Krupa ended, Olivia Remmert, of all people, had started.

Oh, how I really loved this one.

With just over 6 minutes to play and the issue unsettled, a Richwoods player held the ball overhead.

Remmert noticed the ball up there.

She remembered a lesson from Becker.

“Coach always says, ‘Don’t hold the ball over your head.’”

So here’s what Remmert did.

She walked up behind the Richwoods player. The 5-foot-6 senior has become an invaluable defensive specialist, rushed in and out of key moments as the ball changes hands. Sneaky, she was this time. Soft afoot, she was. The music here would be a line of bass notes suggesting stealth. As the music rose, Remmert would reach up with both hands, snap them closed around the ball, and before the victim felt a thing, Remmert would say, “Ah, so kind of you. Thank you very much. Yes, I will take the basketball.”

And take it she did, the broad-daylight pick-pocketry the catalyst in Morton’s third-quarter dominance — a 14-5 run in 3 minutes — that moved the undefeated, No. 1-ranked, defending state champion Potters into Thursday night’s sectional championship game at Rock Island High School.

Richwoods came in with 27 victories. If anyone within 50 miles of Morton can be called a consistent rival to the Potters, it is Richwoods. Always aggressive defensively, always well coached, Richwoods is the 2018 state champion and had designs on another title this season – if only it could handle Morton.

For a half tonight, this was a high-intensity game, more a master class in defense than anything else. Richwoods’ scrambling, athletic, in-your-face defenders played their match-up zone to its usual high standard. John Wooden always told his players, “Be quick, don’t hurry.” Richwoods’ quickness defensively forces its opponents’ offenses to hurry. The result is beautiful defense creating ugly offense.

However good Richwoods’ defense was, Morton’s was better. More dependable, less likely to be burned by mistakes.

What usually happens with the Potters at halftime didn’t happen this time.

Becker usually checks the scorebook for fouls. It’s detail work. It’s also time to think while his team goes to the locker room. Then Becker, en route to the locker room, convenes with his assistants. Three or four minutes later, he goes in to talk to his players.

Tonight the players had barely sat down on the locker room benches before they heard this sound at the door – BOOM!

And the door flew open, and the senior guard, Courtney Jones, who has been around and has seen things and heard things, heard a new sound.

Jones said the BOOM! caused her to think, “Oh, no.”

“Coach was a little angry at us,” the little senior Peyton Dearing said, a little smile playing across her face.

“Coach was mad, really mad,” Krupa said, wide-eyed at the things a sophomore learns along the way. “He was not enjoying this at all.”

It wasn’t so much that 17-12 score. It wasn’t that the Potters’ offense had been turned off. It was that in the last 24 seconds of the half, Morton had contrived to not only lose the ball but allow Richwoods to score in the last second and a half. Instead of, maybe, a 10-point lead, it was a 5-point lead.

Of such details is a coach’s life made miserable.

And coaches who are miserable soon go ker-BOOM!-ing into locker rooms. There they explain to players what made them miserable. In Becker’s case, he had seen an in-bounds play go wrong and had seen his defenders allow a Richwoods player a free run at a layup at the buzzer.

“It wasn’t ‘Panic City,’” Becker said later, always happier to be ahead by five than behind by anything. “But, details – either they were forgetting the details we’d worked on – or they were ignoring them.”

After the coach’s halftime oratory, Morton’s starters stood in a huddle of their own at midcourt, waiting for the third quarter to start. Jones did most of the talking. “I said, ‘This is NOT going to be the last half of our senior season,’” she said later.

Remmert’s steal led to that 14-5 run that gave Morton a 54-31 lead with 2 ½ minutes to play. Eight of Krupa’s points, including the left-handed reverse layup, came in that run. Dearing scored four, two on a slashing drive that saw her disappear among the big people and somehow rematerialize and curl in a layup. Lindsey Dullard scored the other four, first on a jumper an arm’s-length from the rim, later on a layup produced by a Jones steal and lead pass.

“The second half was as dominant as we’ve played all season,” Becker sacid, which is quite the thing to hear from a coach whose team is now 34-0, on a 44-game winning streak, and mostly unchallenged in the calendar year 2020.