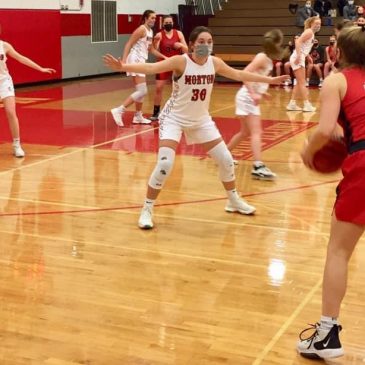 When’s the last time the Lady Potters won a close game against a good team by scoring two points – count ‘em, 1, 2 – in the fourth quarter and those two came on an in-bounds play designed by an assistant coach who retired a year ago to his day job as a mailman?

Hearing the question, the Potters’ coach, Bob Becker, said, “Ummm.” There came a furrow to his delicate brow. And he said, “Uhhh.”

The question was designed to elicit murmurs of not-in-my-lifetime-or-yours because the man asking the question knew he’d for sure never seen it happen. Finally, Becker, in his 21st season, said, “Maybe in a running-clock game, like against Chicago Hope…”

He meant the Potters may have scored two points in the fourth quarter of a running-clock 59-point victory. Tonight’s victory wasn’t one of that kind. This one left you with nerves all a-jangle.

It was the kind where those two points were two more than the Potters had scored in the previous 7 ½ minutes of play. Those two may have been more than they expected to score at all against a strong and relentlessly aggressive Metamora defense that had produced six victories in seven Mid-Illini Conference games.

The two points came with a minute and 36 seconds to play. And they came after the Potters already had failed on the first in-bounds play; a referee’s count was within a second of giving the ball to Metamora. Only a quick timeout call by Becker gave the Potters a second chance. This time they tried a play called “Big D” in honor of the long-time assistant coach Bill Davis.

With the ball on the left half of the baseline under her own basket, Katie Krupa needed only two seconds this time to drop a little pass to the slashing Maggie Hobson on the right-side low block.

Hobson’s layup was the Potters’ only fourth-quarter basket and only their third in the six-point second half of a game dominated by defense.

Up 21-13 at halftime, Morton certainly needed its assortment of defenses – mostly man-to-man with match-up zones mixed in – to hang on to a 25-24 lead at that 1:38 mark. And after Hobson’s layup, Morton’s defense survived furious attack by Metamora’s long-range shooters. They’d made three 3-pointers and then, forced outside the arc by Morton’s defenders, had no alternative other than to keep flinging the rock at the hoop from afar. Metamora’s desperation produced no success.

“It’s always great,” Becker said, “to win on the defensive end,” a summary that followed the coach leading his team in a giddy locker-room celebration “dance,” dance in air quotes because no one could clearly explain what dance the “dance” was, though it resembled something done by folks in cowboy hats in dimly lit places with sawdust on the floor. Call it the Pandemic Potter Two-Step.

Morton, now 5-2 in the Mid-Illini, goes to Metamora for a Saturday afternoon rematch.