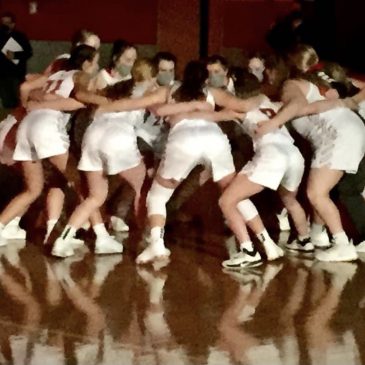 We’ve seen the Bob Becker Dance. He spins, one foot high, while wriggling to get out his suit coat. (Think Houdini in a straitjacket.) We’ve seen the coach get an arm caught up in a twisted sleeve before flinging the whole bag of laundry in the direction of a zebra that had offended him.

We’ve often seen the Bob Becker Stomp in which he crashes a size 12 against the hardwood in announcement that unkind fate has deprived his Lady Potters of a bucket they sorely needed.

Occasionally, because they needed it, we’ve heard the Bob Becker Sermon delivered to Potters who had trespassed against good basketball sense by failing, say, to throw a pass to the open man when she is open, not earlier or later.

It was a good and happy happening. He saw ball movement beyond pretty. Even as a Katie Krupa layup fell through the net, the Potters’ coach pirouetted in front of his team’s bench and came down hammering on the Potterdome’s metal bleachers, both hands beating out a thunderous rhythm, rat-a-tat-tat-boom-BOOM-kerBOOM, with a rim-shot flourish as he snapped his red
mask back into place.

“Until then, we just hadn’t been swinging the ball from side to side and getting it into the paint,” Becker said. “It was beautiful.”

Krupa’s layup came off a Cailyn Cowley pass to the low right block. Those points came with the Potters already up by 11 with 4:44 to play. It was more important that they came at all. The moment’s beauty shone in contrast to much of the Potters’ all-day struggles with high-risk passes that failed against Limestone’s hustling defenders.

Whatever chance Limestone had – down 11-2 in the first quarter, down 13 after three — the Potters quickly extinguished the visitors’ hope. Krupa followed that layup with two more nice plays: 1) an open-court steal and solo fast break, and 2) a layup off a Raquel Frakes pass.

I mention the Frakes pass for two reasons. It was perfect and it came after a Becker Sermon reminding his players they didn’t need to be perfect. It’s not a game of perfect. But neither is it a game in which you allow defenders to know where the next pass is going. “We were telegraphing ‘em too much,” Becker said.

The Frakes-to-Krupa connection was particularly effective today. Of Krupa’s six buckets in the paint, three came on nifty passes from Frakes, who several times found herself at point guard, basically changing positions with Krupa.

“Katie and I have played together so long that we know what each other is doing,” Frakes said.

“We’re able to scan the floor,” Krupa said, “and see each other.”

As to Becker’s reminder they need not be perfect – excellent will do – Frakes and Krupa looked at each other before speaking.

Then they exited stage left, laughing with the joy of being 9-2 in the Mid-Illinii Conference. Limestone is 2-9.

Krupa’s first field goal today was a 3-pointer from high noon. She added six more baskets and seven free throws to lead the Potters’ coring with 22. Frakes had 8, Graci Junis 6, and Addy Engel 6.

The Potters go to Limestone next Tuesday, then end the M-I regular season with two games against conference leader Dunlap, whose 10-1 record includes a 71-14 victory over Limestone.