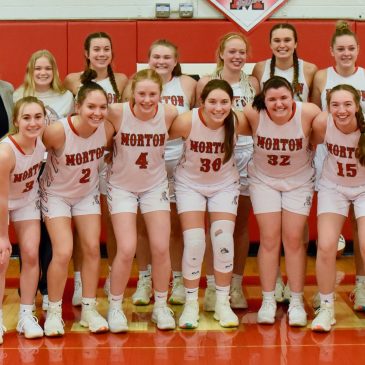 Katie Krupa, big-time player, arrived this afternoon at the Potterdome. It’s not as if we haven’t seen her be really good for three years, among the best in Illinois. But now it’s time for upper-case letters, KATIE KRUPA.

For 36 minutes this afternoon, the 6-foot-2 junior did everything a big-time player can do. Block shots, bring the ball up, out-run the enemy’s fastest people, curl in impossible shots in the paint, do the Steph Curry thing from downtown, and . . .

OK, give me a minute, I’ll cool down.

Look at this. Seven seconds left in the first half. From the far end, the Potters in-bound it to Krupa. Who does not hurry. Who is walking it to mid-court. It’s like she has a plan. Seven seconds, down to four, Krupa crosses mid-court. She is Steph Curry chill. Three more steps, still 25 feet from the hoop, maybe 30, way outside the arc. Stops.

Puts it up. Smoothly, perfectly. It’s in the air at the buzzer.

As nice as that moment was, it was only one of dozens created by Krupa against a strong, aggressive, relentless Washington team that rallied from eight points down in the fourth quarter to force overtime. In the extra four minutes, Krupa scored six of Morton’s eight points. She finished with 29, her career high, and gently rebuffed a reporter’s suggestion that she’d had a big-timer’s A+ game.

The Potters needed Krupa’s A-game. Three times, early, they led by as many as eight and midway in the third quarter still led by nine. But Washington did not cave. It made five 3-pointers in a quarter’s time, the last bringing the Panthers close enough that, with 11 seconds to play, they made a high-difficulty shot in the paint to force overtime.

By scoring first in overtime – its only points in the period – Washington earned its first lead in an hour. Krupa quickly evened it with a driving layup. And two Raquel Frakes free throws at :46.6 put Morton on top to stay. Krupa finished it off with four straight free throws.

Krupa and Frakes! Between them, 42 points today. They’d come to the Potters varsity together three years ago, Krupa as a freshman, Frakes a sophomore transfer from Lewistown. Today, at game’s end, they embraced at mid-court, both crying, Frakes later saying, “From Day One, we’ve bonded. She helped me so much. I was scared, actually. I didn’t know if I could play in a program like Morton’s. We helped make each other better.”

A basketball net, cut down in the team’s giddy celebration, hung around Frakes’s neck when she asked, “Is my mascara running?”

Not knowing exactly what to tell a teenage girl who’d been happy crying and now worried about her mascara running, I said, “Uhhh.”

Her inquiring eyes asked again, so I said, “You look like you just played a basketball game.”

And a beautiful game it was this afternoon in the Potterdome. In defeating a very good Washington team, the Potters won the Mid-Illini Conference tournament and finished the season with a league-best record of 14-3.

Here’s how beautiful it was. At the end of what the Potters’ coach called “a crazy game, a crazy season,” it got crazier when he talked into his team’s locker room — where players doused him with enough water to leave him happily drenched and saying, “I’m so proud of this team, how they grew so connected in this season.”

Here, also, is how beautiful it was. Listen to Katie Krupa explain her thinking on her slow-walking to that 3-pointer at the halftime buzzer.

“I was well aware of the time. (Seven seconds.) And I knew we had to score to get momentum for the second half. So as I was taking it down the court, I noticed my girl decided to sag off me. Which I thought was a little disrespectful. So I just let it fly. Like, dang, don’t guard me then.”

Krupa’s 29, incidentally, gave her 1,016 points for her three seasons, the 15th Lady Potter to reach the 1,000-point mark. Frakes added 13 (on defense, allowed only 10 points to a Washington star who’d scored 27 the night before). Addy Engel had 3, and Maggie Hobson and Cailyn Cowley 2 each. Faith Hostetler delivered the Milk Duds again, smoothly, perfectly