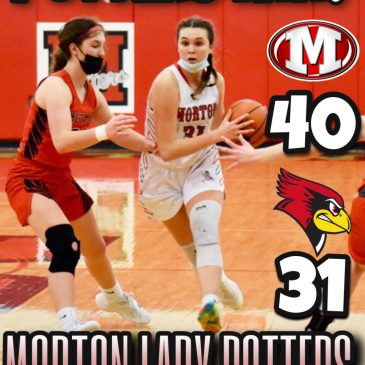 Katie Krupa cut hard down the right side of the lane. There she handled a bad bounce pass at her knees and recovered to find herself too deep to put up a layup – but she put it up, anyway, from an impossible angle, nearly behind the backboard, and somehow it kissed the glass so softly as to fall in. And there came a coach’s voice declaring, at great volume, “YES!!” Bob Becker liked it a lot.

Next time down, from about 10 o’clock on the right arc, Krupa put up a shot from way out there – wait, no, not a shot, it was a long, looping pass to Raquel Frakes hustling to the hoop from the left side. A touch off in timing, Frakes caught the pass and, instead of scoring there, took two steps through the paint to score. This time, Becker said nothing, but there came to his bearded face the serene look of a coach who had just won a game.

Becker called for those set plays, the first “Chest,” the second “Bradley.” Morton’s lead was 33-26 with six minutes to play. But the best part was, the Krupa and Frakes buckets came just 27 seconds apart. Killers. There’s an old country-song lyric that goes, “She took my heart out and stomped that sucker flat.” Exactly.

So tomorrow afternoon, at 4 o’clock, the Potters will play for the Mid-Illini Conference tournament championship. They’ll play Washington, an upset winner tonight over regular-season champion Dunlap. In an awkward, Covid-abbreviated season in during which the Potters have won 13 of 16 games, somehow they have arrived at what Becker recognized as familiar territory.

Five times, his teams have played in state championship games. There are no state tournaments this season. But the Potters have done the next best thing available to them. “We’re playing in the final game on the final day,” Becker said.

I hasten to add that all was not beauty tonight. Metamora led after a quarter, 6-3. Yes, 6-3. Metamora led 15-7 with 1:33 left in the half. Yes, 15-7 after 14 ½ minutes. The temptation is to type “defensive struggle,” Metamora’s zone impenetrable, Morton’s mixture of tactics unsolvable. The temptation must be resisted. Morton’s only struggle was deciding to shoot the cursed thing. At least one man (blush) was heard to say, “Put it UP.” Look, just throw it at the damn hoop. Something.

And along came the littlest Potter, 5-foot-3 junior Paige Griffin. She’d missed three games in quarantine this weird season. During her time out, she had time to think. What she thought was, “I can’t just keep passing it to Katie and Maggie and Rocky,” meaning someone had to shoot besides Krupa, Hobson, and Frakes. She asked Becker what she had to do to improve, to help the team with more than just defense (where she’s a persistent pest of the best kind).

And that’s how, with 1:33 left in the first half, Griffin found herself open at the top of the key and she made a 3-pointer that touched nothing but net. “I had to step up,” she said.

A minute later, Hobson did it from the left side. And with a second left in the half, Hobson threw one at the damn hoop – really, just falling away from a defender, she practically baseball’d the cursed leather in the direction of the hoop (a truism: none of ‘em go in you don’t shoot ‘em). Hobson’s throw crashed against the backboard and fell in at the horn.

No style points there, but the Potters took the real 3 points. Starting with Griffin’s 3, they’d scored 9 points in 93 seconds. And, having done nothing ‘til then, they led at halftime, 16-15. My note on Morton’s lead: “How in the world…???”

The question was best answered in the fourth quarter. Still dominant defensively – Metamora was reduced to shots born of desperation – the Potters went on a 9-0 run that ate up all but 55 seconds of the quarter.

Krupa dominated those moments, scoring on that driving layup and adding four free throws given her by Metamora defenders just as desperate as its shooters. Of Morton’s 24 second-half points, Krupa had 12. “I’ve just always seemed to play better when the game’s on the line,” she said.

Krupa led Morton’s scoring with 17. Griffin had 8 (her second 3-pointer broke an 18-all tie early in the third quarter). Hobson also had 8, Frakes 6, and Sedona McCartney 1.