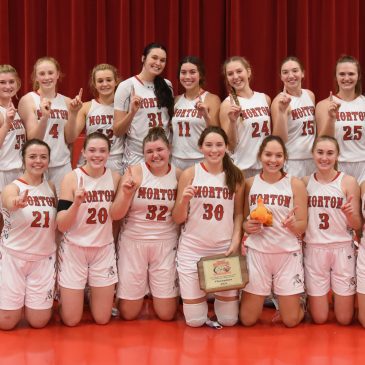 You have something good going when one name is all you need to say. There was “Chandler” and “Brandi” followed by “Tenley” and “Lindsay.” With those names come four state championships, a nearly-perfect 37-1 season, and victories achieved at such a rate and with such precision that somebody wrote, “They’re the Golden State Warriors, only with ponytails.”

Those were tough acts to follow, as noted by Maria Lopko tonight. “We have something to prove,” the senior guard said in the happy aftermath of the Potters’ convincing victory over Richwoods that gave them the championship of the Morton Thanksgiving Tournament. Unbeaten in the four games of the round-robin event, the Potters won by 22, 16, and today’s 31 and 26, the last two blow-outs done with running-clock fourth quarters.

I went to Lopko because she is, officially now, the Keeper of the Potter Turkey.

It’s a rare honor, never before bestowed on any Potter, mostly because it didn’t exist until two days ago and then only in Bob Becker’s mind. The coach and his wife, Evelyn, raised two daughters. Small wonder that he might find a Beanie Baby in the house. This one was an orange-colored turkey. (Hang with me, explaining coming.) A “turkey” can be a bowling term signifying three strikes in a row. Becker, a coach 24/7, translated that into three defensive stops in a row. A turkey. (Get it?) And it came to pass that the coach, looking for someone to be the Keeper of the Turkey, handed the orange Beanie Baby to … yep … Maria Lopko, a senior who occupies a place deep on the bench and mostly invisible except when leading cheers from there.

Lopko’s job was to keep track of defensive stops.

Every third stop, she would raise high the Potter Turkey.

“My arm got tired,” she said one afternoon. “Seven times I did it. Seven times, three stops in a row. Coach says if we do that, we win.”

There are only so many questions you can ask a bright, young woman about a Beanie Baby turkey before she takes the conversation another direction, which is how we got to these Potters, at 4-0, being a team with something to prove.

“It’s not like we have four D-1 players,” Lopko said. “And we didn’t have a real chance last season, with Covid and all, to show what we can do. Now we’re getting a chance. We have lots of potential and we’re working hard. We can’t let the Potter legacy down.”

Not much chance of that anytime soon, to judge by this evening’s date with Richwoods. It was 11-3 after a quarter and 19-5 midway in the second. Richwoods threw in a couple 3’s to move within eight at 24-16 late in the half. The Potters scored the next 22 points — winning the third quarter, 15-0 (and in four games, they won the third quarter, 67-18.) That put the mercy clock to running against a Richwoods program that only four seasons ago ended Morton’s run of three straight state titles en route to winning its own.

That 15-0 third quarter is proof positive of Morton’s dominance this evening. It began with a Katie Krupa layup, one of the nine field goals she scored in the paint, either on her own extraordinary moves or off nifty entry passes to the low block. After Maggie Hobson’s defensive work out front forced a Richwoods pass out of bounds — bringing cheers from fans of persistent defense — Tatym Lamprecht capitalized on the good work with a 3 from the left side. Paige Chapin scored on a put-back, Krupa passed Richwoods people in a blur with a long-stepping drive to the hoop, added two free throws next time down, and then passed us all in a blur by stealing a pass and going full-court for a layup.

Got all that? Wait. There’s more. There’s Tatym Lamprecht. “I like stealing the ball,” the junior guard said later. “I go for the ball a lot. I’m feeling great.” Four games into her Potter career — a transfer from East Peoria, moving into the Morton school district after a house fire this summer — Lamprecht has become an important player at both ends of the court, a good outside shooter who also can finish at the basket and a defender eager to take advantage of an opponent’s carelessness, as she did by taking a loose dribble in the backcourt and sprinting away for a layup to end the Potters’ 15-0 third quarter.

Point is, these Potters. with something to prove, did some proving today. Maybe their opponents arrived in down years; none of the four others looked much good at any time. But maybe Morton’s defense had everything to do with that. The Potters make few mistakes while their opponents seem to make many.

Only one thing went wrong. Mario Lopko didn’t get to score. Off the bench late, as usual, she made a pretty drive to the hoop. Her shot rolled off the rim. Even as a referee’s whistle indicated that Lopko had been fouled and would shoot two free throws, the game-ending buzzer also sounded. The referees might have allowed Lopko to shoot, but no, the running block had run out, time to quit, dinner’s waiting at home, they walked off the court, and poor Maria Lopko didn’t get to shoot.

Lopko said, “I wish I’d made the shot. But the free throws, that’s OK. I haven’t been doing so good on them lately, anyway.” And she exited stage left, smiling.

Krupa scored 20, Lamprecht 13 (with three 3’s), Chapin and Isabella Hutchinson had 4 apiece, Emilia Miller and Paige Griffin each had 3, and Addy Engel had 2.