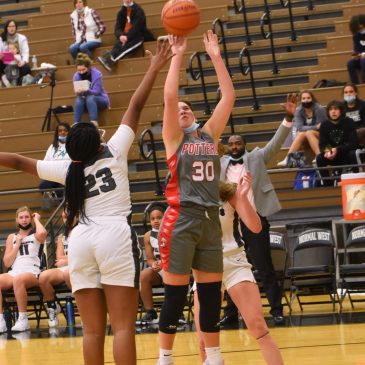 The idea is a Lady Potter throws a high lob toward the hoop. There Katie Krupa rises to catch it and drop it in. It’s a play called “Bradley” and everyone south of Chicago and north of St. Louis has seen it lots of times, way back to Brandi Bisping and Lindsey Dullard, now with the estimable Miss Krupa, who went up for Maggie Hobson’s pass this evening, only to have it . . .

A man with a notebook approached Maggie Hobson and said, “I need you.”

“I was a little late throwing it. But Katie was open under the basket, and as soon as I threw it, I knew it was going to hit the rim.”

“It was supposed to go over the rim, but I didn’t get enough oomph behind it.”

“I didn’t think it would be a swish,” Hobson said.

The lob to Krupa became a 3 for Hobson, a sudden and unexpected 3 from the left side. Hey, she threw it two-handed from about waist level and intended the ball to fly over the rim by a foot or two. The Normal West public address announcer had named every scorer and credited every assist all evening. But not this time. He sat silent rather than be heard saying, “A 3 by Hobson, assist by Hobson.”

The unintended 3 changed everything. It gave Morton its biggest lead at 51-45 late in the third quarter. And Normal West stopped scoring. It didn’t make a field goal from that point on, a full 10 minutes. Hobson’s swish started a 12-0 run that put the Potters up 60-45 with 5:43 to play. Game over.

Until then, the Potters hadn’t done much. At halftime, I made a note. “M offense vs zone, lifeless. Meanwhile, NW has made 5 3’s.” The failures at both ends left Morton down at halftime, 29-25.

No problem there, as we learned in Morton’s Thanksgiving Tournament. There’s a third quarter coming up. The Potters won four games in the tournament, all by double figures, most of the margins provided by domination of the third-quarter. They won the four third quarters, 67-18. This time, at Normal West, after scoring 25 in the first two quarters, the Potters scored 29 in the third alone. They moved from four down to nine up.

“We played harder and better,” he said.

“Our coach got a little stubborn,” the smiling coach said about the stubborn coach. “He stayed in a man-to-man.”

Second half, both coaches decided to mix in a little zone. It confused Normal West’s shooters.