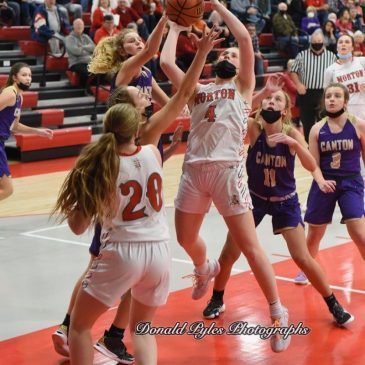 What I do sometimes, because I can sometimes, is make a note from something I see on Bob Becker’s coaching whiteboard.

It’s big enough and his Magic Marker scrawls sometimes are clear enough to be read from the bleachers’ second row behind the Lady Potters bench.

Tonight I couldn’t read it because he’d lost it. Somewhere between Tuesday night’s game in Normal and tonight’s in the Potterdome, the whiteboard disappeared.

So Becker had a mini-version of the board tonight, not nearly big enough to contain his starting lineup, the defensive assignments, and bits of wisdom, encouragement, and pleadings.

No wonder, it says here, the Potters had so much trouble with Canton. Yeah, yeah, I know, whiteboard, schmiteboard, it’s got nothing to do with the game. But, hey. Blaming it on the missing whiteboard is as good an explanation for the troubles as what Becker said afterward. What he said, in analysis shared with the assembled press (me), was, “I dunno.”

Anyway, the Potters once trailed, 12-5. At halftime, when it was 12-11, I traded small talk with two ex-Potters now playing at Illinois Central College, Courtney Jones and Peyton Dearing. I urged them to suit up for the second half. Failing to persuade them, I scribbled a note, “M better be good in 3d.”

Morton was good in the third quarter. It opened on a 13-1 run after scoring the second quarter’s last six. That’s 19-1. It took 8 minutes and three seconds. At full-game length, that run becomes 76-4.

One section of that run explains everything.

It began with Katie Krupa’s put-back of a Tatym Lamprecht 3 that rolled around and out. Then Krupa, aggressive on defense, made a mid-court steal for a breakaway layup. After Maggie Hobson’s defense forced a Canton turnover on a five-second call, Hobson followed up with a 3 off a Krupa pass. Best of all, Krupa, did a thing. Trapped with the ball under the Potters’ basket, her back to the baseline, tight-roping her way across the paint, with her left hand — her left hand! — she put the ball so high off the glass and so softly off the glass that it fell through the net, a thing of remarkable beauty.

In less than three minutes, Morton’s lead grew from four points to 10. There was still a quarter to play, but this game was over. Talent had prevailed. Remember that Canton once led, 12-5, meaning the Potters won the rest of it, 39-11. There’s good reason they’re undefeated in six games. It just took a while to get there tonight.

There was good whiteboard news after the game.

“The world is right again,” Becker said. “Found it!”

“On the floor, behind my desk.”