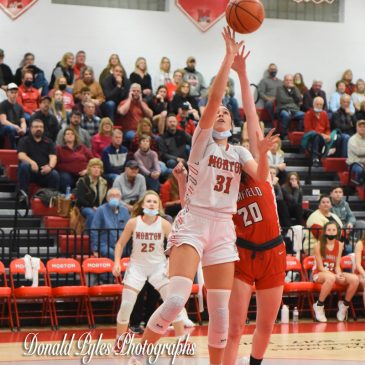 Tonight, before the Potters played Brimfield, there was a moment of silence in the Potterdome. We all stood and we were all one in that moment. A young man from Brimfield died on Tuesday of this week. The folks who came down I-74 from Brimfield knew him. Those of us from Morton knew him, too, maybe not by his name, Jacob A. Look, but we all know a young man like him, 17, an athlete, a basketball player, a life to live. We stood for a moment, silent, praying for Jacob A. Look who could be our son, our friend, someone we love.

Then five Potters players moved to the end of their bench. There they each picked up a bouquet of flowers. They walked toward center court with those flowers. Five seniors — Katie Krupa, Maggie Hobson, Paige Griffin, Paige Chapin, and Maria Lopko — handed bouquets to the Brimfield starting five — Ella Luna, Jaclyn Fabry, Elynn Peterson, Sophie Bedell, and Elly Doe. They were flowers in memory of Jacob A. Look and they were flowers saying we’re all in this together, Brimfield and Morton, girls and boys, moms and dads, all of us lucky enough to rise for a moment of silence.

How nice. How very nice.

A nice night all around, actually, a night on which the Potters played their very best basketball of the season, if only for a half. They led at halftime, 40-11. Though the Potters are a 3A power and are expected to defeat any 1A power, even a program as strong as Brimfield’s has been for years, that 40-11 margin at halftime was extraordinary. Coach Bob Becker said, “We were terrific at both ends the whole first half.” In one three-minute stretch, Morton outscored Brimfield 16-0 to go up, 40-8.

How good was that run?

So good it made me ask a man behind me, “What year is this, 2019?” That was the year the Potters won their fourth state championship. At halftime tonight, both Krupa and Tatym Lamprecht had outscored Brimfield — Krupa with 14, Lamprecht 13 (all but one of those in a spectacular two-minute run that included a four-point play when fouled on a long 3-pointer.)

“That first half,” Krupa said, “was almost perfect.”

But the third quarter, not so much, not even a little bit.

“The worst three minutes of a second half ever,” she said.

It was then that a man who needs hearing aids needed no hearing aid to hear Bob Becker address his players this way: “THE GAME IS NOT OVER.” He respected the Brimfield team that came in win an 8-0 record, winning by an average of 40 points, and admired their resilience in tonight’s game against a four-time state champion on their home court. “They weren’t going to quit coming after us,” he said.

Though Morton’s lead dropped to 16 with a quarter to play, the issue was never in doubt. It is a measure of a team’s possibilities that it can be undefeated, can win nine games, can win them all by at least 16 points and by as many as 26, and play its best half of the season to build a 29-point halftime lead against a previously undefeated team, and still believe it should have been better.