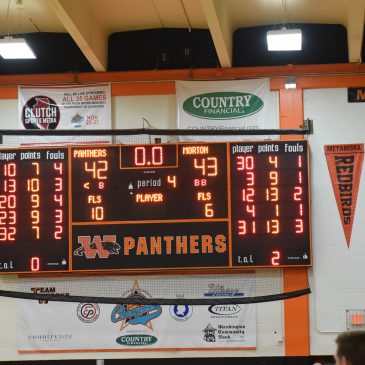 Home from Washington, fed the kitten, took the dog out, ate a stack of Oreo Thins. It was a be-still-my-heart night. Nine lead changes. No lead bigger than five. Two lead changes in the last 87 seconds. A 3-ball took flight with five seconds to play and the way things were going, it well might have fallen from the sky and sent us into overtime. Home. Breathing again.

There was some doubt of that with 1:24 on the clock. Washington was up 38-37, Morton with the ball, the Potters spread to all corners, running a play called “Michigan,” and I’d describe the movements of each player except I have no freakin’ idea what those movements are other than to say whatever they are, they wound up with Tatym Lamprecht shooting a 3, and that, sports fans, is a beautiful thing.

With 1:10 to play, Lamprecht took a pass at the top of the key. Had the geometry been different, “Michigan” might have called for the little junior guard to flash down the lane for a pass from Katie Krupa. Instead, with nowhere to go inside, she waited outside. There, a step behind the arc and two steps free of a defender, she squared up for the shot. Whatever Lamprecht’s season’s 3-ball percentages were at that moment, they didn’t matter. Squared up, given space at the top of the key, she is not going to miss that shot.

More frenzy ensued in a game that was physical from the get-go, every possession contested, neither team able to create a sustained run against aggressive defenses; in fact, neither team scored more than five points without interruption. Washington came in with a 9-1 record, Morton 9-0, and they played like elite teams that might not lose three or four games all season.

In that last burst of chaos, with a chance to cut Morton’s lead to two, Washington missed two free throws badly. And yet, in a whirling, spinning, falling scramble to get the rebound of the second shot, Washington gave that despairing free throw shooter a reprieve. Unable to make a free throw unguarded, she yet threw in a long jump shot to make it 42-40 with 19 seconds left.

At :12.9, Krupa’s free throw moved the score to 43-40. After a Washington timeout, during which Bob Becker told his team, “DON’T FOUL,” Washington had :06.6 seconds to put up a 3. It got the shot off, badly, and a put-back two was inconsequential.

“I told the kids I was really, really proud of them,” Becker said later. “They showed a gritty level of toughness.”

And what did Tatym Lamprecht think of her play?

I saw Jim Mattson, the television idol, with his camera light on Lamprecht. She’s not a teevee star yet, and Mattson had to laugh afterward because the closer he came to her with his camera, the more she backed away, a happy girl smiling into the light. What she said on camera, I dunno. I caught her, too, and she explained the “Michigan” play — not that I understood the nuances of movements — and she said a few words that all 3-shooters would love to say: “It was really fun tonight — at the end — when we won.”

Lamprecht and Krupa each had 13 points, Paige Griffin had 9 (and an exceptional floor game), Maggie Hobson 4, Izzy Hutchinson 3, and Addy Engel 1.