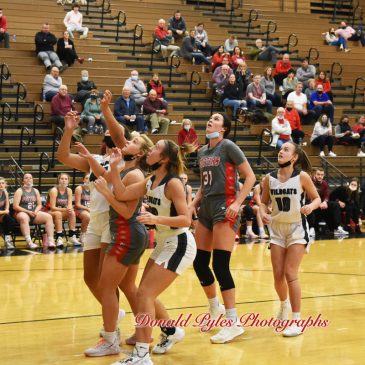 It was closer than that.

Stunned early by Geneseo’s 24-point first quarter and twice down by as many as 13, the Potters moved within a point late in the third quarter of the State Farm Holiday Classic semifinal game.

“I told my girls Morton’s a state-caliber team and they’re going to come back on us,” the Geneseo coach, Scott Hardison, said. “I told them that if they got close, I’d take a timeout. And then we can come right back at them.”

Came the Morton run. In the first five minutes of the third quarter, they outscored Geneseo 14-6. The move started with an Addy Engel layup off a Krupa pass somehow delivered through three sets of Geneseo arms, for Krupa played heroically tonight, never taking a step except to bring along three Geneseo defenders hacking at her. Despite being outnumbered every time down, Krupa followed with two three-point plays inside. Then came Tatym Lamprecht with a 3 from the left side, followed by a Maggie Hobson 3 from the deep right corner.

Suddenly, Geneseo’s lead was 35-34 with 3:09 left in the quarter. Anything could happen now.

An easy bucket moved the lead to three points.

Then, with a chance to tie, Hobson put up a 3 from the right side, a pretty thing, the only trouble being it was in and out and here came Geneseo flying downcourt, as it did all night, as its coach said it would. They were flying downcourt with the Potters trying to keep up. And eight seconds after Hobson’s miss — eight seconds! one breath, maybe two! — one of Geneseo’s shooters knocked down a 3 of her own, and I’d tell you her name except it doesn’t matter when everybody’s a shooter, and on this night Geneseo’s nine 3’s were made by four different people who went 5-for-6 in the stunning first quarter.

In the third quarter’s last three minutes, Geneseo finished an 11-2 run to put the Potters 10 points down going into the fourth. They never got closer than five the rest of the way as Geneseo’s relentless runners closed the deal with a 10-3 run that included eight free throws.

Wait. Read that last paragraph again. Sound familiar? It should because that’s the way Morton has beaten people for years. Get ’em down with 3’s, go to the line late, get a W.

In fact, everything Geneseo did tonight was a mirror image of Morton’s success in the last decade.

Make 3’s and free throws. Play aggressively with the ball and against the ball.

Which brings me to a backstory I love.

Two years ago, Morton defeated Geneseo in this State Farm event, 79-48. Afterwards, I asked Scott Hardison what he thought of the Potters.

He said, “I’ll give you the backstory first.”

On December 27, 2019, he was in his eighth season at Geneseo. He’d had 20-victory seasons, but not success of the Potters’ state-trophies kind. He had lost to Morton in this tournament once before, also by 31 points. So that summer of ’19, he made a phone call.

He called Bob Becker, the Potters’ coach. Said he’d drive down to Peoria. They ate at Tyroni’s Pizza in Bartonville. There Hardison asked, in essence, how is it done, how do you build a program that succeeds at the highest levels?

“Bob was very generous.” Hardison said. “He went through his entire history, the Tracy Pontius teams and on, and that’s the kind of program that we want. In Class 3A basketball, Morton is the model. We’re still building toward that.”

Curious, the way life works out. On this December night, Becker was stuck at home again recovering from Covid-19. And I found Hardison high in the Normal Community bleachers afterward, there to scout his team’s opponent in tomorrow night’s championship game. He wore a mask against the virus. But the mask could not hide his smile.

“We’re trying to build what Morton has,” Hardison said, “not only success but sustained success.”