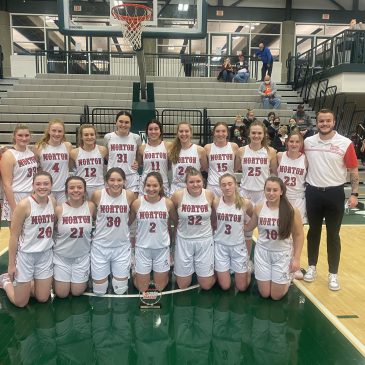 Dakota Neisen, filling in for Bob Becker at the genius job, looked at the scorebook at halftime. The coach wanted to know how many points Mother McAuley’s #32 had scored. “All of them,” he said, meaning that Isabella Finnegan had made five 3-pointers and outscored the Potters all by herself, 19-17.

So Neisen asked his players, “Who wants her?”

Katie Krupa raised a hand. “I got her,” she said.

And Isabella Finnegan’s most excellent adventure was over. With Krupa attached at her hip, Finnegan was rendered into spectatorhood. Midway through the third quarter, she scored on a nice slashing drive to the hoop. That was it. Effectively removed from the action — did no genius exist on the McAuley bench? did no one notice she was no longer touching the ball? did no one think to set a screen for her?– the poor girl once was seen standing alone near the midcourt line while her playmates went 4-on-4 against the Potters. Perhaps she took that chance to reminisce about the good ol’ days of the first half. One felt for her. Might not someone at least bring her popcorn?

Meanwhile, the Potters did some good ol’ days stuff themselves. Until Finnegan made a free throw with 2:25 to play– her only other point in the second half — the Potters went on a 29-2 run for a 46-21 lead that guaranteed them the third-place trophy in the State Farm Holiday Classic.

That run calls for a note or two. First, fill-in or not, Neisen did the coach’s job of motivating the Potters in the early minutes of the third quarter. He did that by doing what coaches have long done. Do a silly thing out there, you come sit by me. Three starters committed turnovers in the first two minutes. Neisen’s analysis, delivered out loud: “I’m gonna rotate in whoever is ready to play.” And those starters soon warmed the cushioned seats beside him. Then the game-deciding run started, in the third quarter, like this . . . . .

It was Morton 31-19, and it was over, and the only mystery came with 5 minutes to play.

That’s when Izzy Hutchinson did whatever she did.

The sophomore had the ball and disappeared from my sight and next thing I knew the ball was rising toward the ceiling and falling through the net.

“I was at the free throw line,” Hutchinson said, “and I went between two girls and one of them hit me on the hip and kinda twisted me around and I kinda went . . .” (Here she did a body language thing that resists translation, other than maybe she thought to throw a hook shot backwards over her right shoulder . . . or something) . . . “and I thought I’d throw it high up on the backboard and hope it went in . . .” (always a good thought) . . “but it didn’t hit the backboard, it hit that little piece of the rim” . . . . (the flat bracket attaching the rim to the board) . . . “and it went in.” . . . (Here, a smile of teenage delight).

That made it 39-21, and my only other play-by-play note worth mention came by way of Maria Lopko, who, you may remember, is a little deep-bench senior entrusted with the orange turkey that is symbol of the team’s commitment to defense. After Krupa and after Hobson and after Paige Griffin and after Addy Engel, the job of defending #32 fell to Maria Lopko.

“Whoa,” Lopko said later. “I go in the last two minutes and I’m in man-deny on her?”

She stayed near enough the star to put a hand on the star to keep track of the star and this hands-on stuff irritated the star so much that the star whacked away the deep-bencher’s pestiferous hand.

“My only job,” Lopko said, “was to not let her catch the ball. I guess she was frustrated.”

Krupa liked the Potters’ work this day. “Reassuring,” she called it, the romp coming not even a full day after Wednesday night’s semifinal loss to Geneseo. “I’m very proud of this team.” As for winning the third-place trophy — a nice thing, a good thing, maybe even an omen thing to the superstitious — Krupa said, “You know about the State Farm ‘curse,’ right?”

Krupa smiled and exited stage left, eager to get on with whatever’s coming next.

Krupa led the Potters scoring with 12. Lamprecht had 11, Engel 7, Hutchinson 6, Hobson 4, VanMeenen 3, Griffin 3, Gaby Heer 3, and Abbey Pollard 2.
****
Geneseo came from 12 down in the second half to defeat Washington, 52-49, in overtime in the championship game tonight.

Katie Krupa was named to the all-tournament team.