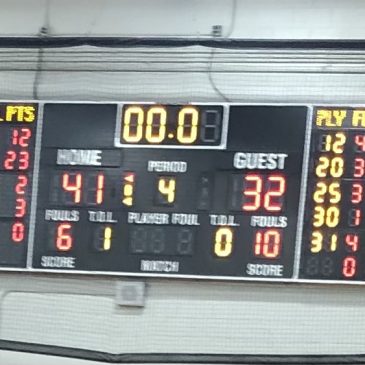 Meechie Edwards, the Peoria High coach, is my favorite sideline coach, mostly because I can hear him loud and clear, like, FROM A MILE AWAY!

But not tonight. We were in the presence of a new, mild-mannered Meechie.

“Our team motto this year is ‘Have fun.’ he said. “We’re living in a tough world. So even I’m toning it down.”

Also, as he did not say, it’s more fun to be on the laughing side of the scoreboard — especially against Morton. Not only are the Potters winners of four of the last six 3A state championships, they had defeated Peoria High five straight times, most recently two years ago by 22 points in a sectional tournament game.

But I hurry to say that every Potters victory over Peoria has been hard-won. Meechie’s teams have come at Morton hyper-aggresssively at both ends, asking no quarter, giving none.

The difference tonight, Peoria’s offense was as good as its defense. That’s because sophomore guard Aaliyah Guyton is fabulous with the ball. Need a step-back 3? Call Guyton. Her 20 points included 4 3’s, each put up more quickly and more smoothly than the last. Need a floater in the paint, using the board? She did that tonight, too. An old-timer in the Morton crowd (me) remembered another mercurial guard, one from a decade ago, Springfield High’s Zahna Medley. She’d break a defenders’ ankles with a cross-over dribble this time, next time she’d drop in a rainbow from 25 feet. (Medley went on to be Texas Christian University’s all-time leading scorer.)

Like many Potters games this season, this one was decided in the third quarter. And decided for them in a decidedly disappointing way.

Then Peoria won the third quarter, 11-2.

Two points. As in one more than one. As in a Katie Krupa layup halfway through the quarter. By quarter’s end, Peoria led, 32-17.

Morton coach Bob Becker explained it this way: “In the third quarter. we freaked out. We lost our poise and composure.”

No coach whose team comes into a game 15-2 and ranked No. 2 in state 3A likes to hear such things said, and most certainly doesn’t want to hear them said by himself.

Becker went on, biting off more distasteful words. “We lost it between the ears.”

Did he say all that in the locker room to his players?

The only consolation, small indeed, was Morton’s resilience in the fourth quarter. It went on a 13-4 run — featuring its only two 3-pointers of the night, both by freshman Ellie VanMeenen — to close the Peoria lead to 36-30 with 1:52 to play.

By then, Peoria had gone to a ball-control offense, basically toying with the Potters, playing keep-away, asking Guyton to extend her magic to a dribbling act that more than once saw her leave all five Potters wondering where she would be seen next. Morton scored once more as Peoria closed out with four free throws.

Krupa and VanMeenen each had 10 points for the Potters. Izzy Hutchinson and Maggie Hobson each had 5. Tatym Lamprecht had 2.