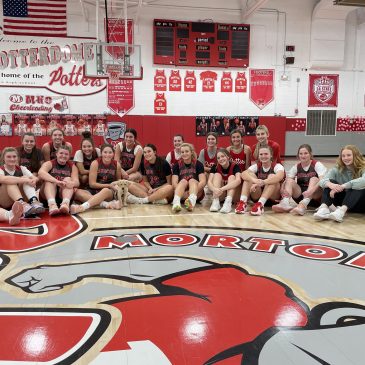 Izzy Hutchinson did not score. She was a star.

Ellie VanMeenen scored twice. She was a star.

Graci Junis, off the bench, star.

At the Potterdome tonight, they were all stars in a game for undisputed first place in the Mid-Illini Conference.

Izzy Hutchinson’s in-your-face defense against Washington’s best scorer baffled that girl, who once put up a 3 that hit the top edge of the board and, for the night, scored 7 points, none in the decisive last 15 minutes. . . . freshman Ellie VanMeenen’s two buckets were 3-pointers and six of Morton’s 14 points in the first half. . . . Maggie Hobson and Tatym Lamprecht — the Potters’ “Splash Sisters,” only with ponytails — made five 3-pointers in the second half and 25 of 34 second-half points . . . Graci Junis did a reserve’s dirty work of rebounding and defense when it must be done. . . .and Katie Krupa, besides presenting a constant offensive threat (13 points), blocked so many shots that a Washington star went up for a 3-point shot and, once up there, saw Krupa closing on her, and decided, “#$%&,” (or however a teenage girl might express excruciating dismay) and came down without the ball ever leaving her trembling hand. Traveling. It happened with two minutes and 10 seconds to play and Morton up 42-25.

It was Washington’s ultimate concession of embarrassing defeat. It was also the Potters’ declaration that they expect good things to come.

“One of the funnest games I’ve ever played,” Hobson said. “It’s only up from here.”

“So fun,” Lamprecht said. “The best we’ve been all year.”

“We played our tail off from beginning to end,” the coach, Bob Becker, said. “Everybody was locked on completely. We are on an upswing.”

Coaches like to talk up “team” victories. They’ll say, sure, the STAR scored a bajillion but, hey, don’t forget the moms’ bang-up job on laundry this week. Tonight, trust me, the Lady Potters created a spectacular TEAM victory. Washington came in with a 19-4 record and had lost to the Potters by a point five weeks ago.

Morton’s defense was sensational, proactive, aggressive, smart. For a half, that seemed that might be enough to win. In the first quarter alone, the Potters’ defense left Washington with nowhere to go. The visitors made four turnovers, put up three airballs, had a 3-pointer blocked, and one poor girl twisted herself into such a pretzel as to throw a shot UP into the net.

The first strike came from Tatym Lamprecht. The junior guard scored 11 points in five minutes of the third quarter to move Morton from a 14-10 lead to 25-16. She did it with 3 from the left corner, a driving floater high off the board, and two more 3’s — done 18 seconds apart. “When I make 1 or 2, I feel really good,” she said.

Then it was Maggie Hobson’s turn. The senior guard’s successive 3’s only 35 seconds apart opened the lead to 38-23. (Add it up. Four of the Hobson-Lamprecht 3’s came in a total of 53 seconds.)

“I told you,” Krupa said, telling us again, “when defenses come on me, we can get it to Maggie and Tatym.”

The victory raised Morton’s overall record to 21-3 and moved it at 10-1 past Washington and Metamora into first place in the Mid-Illini. Washington is now 9-2 in the league, and Metamora, upset tonight by Dunlap, is also 9-2. Metamora will be Morton’s next opponent, Saturday night in the Potterdome.

Hobson led Morton’s scoring tonight with 14. Krupa and Lamprecht had 13 each. VanMeenen had the other 6.