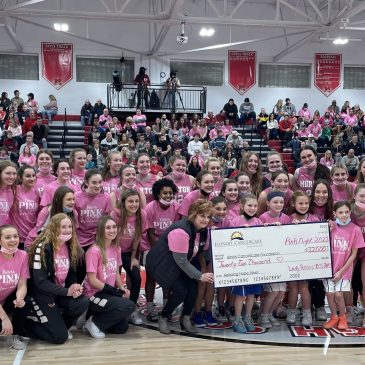 In this OUCH-iest of Lady Potters seasons, four injured players were in their warmups on the bench for Pink Night tonight. Paige Griffin and Addy Engel, both of whom had been in the team’s starting lineup, are out for the season. And now we see Maria Lopko and Magda Lopko sidelined as well. The list of injuries includes broken bones, a stress fracture, sprained shoulder, and a lower vertebra inflammation.

And where, pray tell, was Graci Junis?

In her hospital room.

Because there was more than enough snow to go sledding, the Lady Potters organized a play day Wednesday in the hills of Morton’s Northwoods Park. Too soon, the play day became a bad day. Junis ran her sled into a tree and suffered internal injuries. A 911 call brought paramedics to the park. They carried Junis to a Peoria hospital where she was in intensive care today.

A starter as a freshman and a top reserve of late, Junis came to the Potterdome tonight but only by the magic of FaceTime.

“Graci wanted to be included in the pre-game talk,” senior Maggie Hobson said.

So the Potters dialed her up for coach Bob Becker’s talk before sending them out against Pekin. If Becker’s mission tonight was to fire ’em up and forget Saturday’s last-second loss to Metamora, the Potters can say mission accomplished.

“We bounced back from a really tough loss,” Katie Krupa said. The senior all-stater, tonight’s leading scorer with 19 points, might have been echoing Becker’s post-game talk. He said, “Teams with a good pedigree will bounce back. The girls responded tonight.”

Pekin is a second-division Mid-Illini team that lost to the Potters at home a month ago, 55-35. Tonight was not much different as the Potters went on an 25-8 run to move from 9-7 down in the first quarter to a 32-17 lead early in the third. The run included the kind of offense the Potters need consistently. They got four 3-pointers, two by Ellie VanMeenen, one each by Hobson and Tatym Lamprecht. And Krupa not only dominated in the paint, she also added a 14-footer to show no one can give her that shot for free. Defensively, the Potters were so good that Pekin’s only real offense was to back up, to back way way up, and hurl a prayer skyward. Of their 12 field goals, nine were 3-pointers, and my guess is they put up at least 9 airballs from out there and were 9-for-35 or worse overall.

Now the Potters are 22-4 for the season and 11-2 in the Mid-Illini. By beating Limestone in the Potterdome next Tuesday, they can claim at least a share of their seventh straight regular-season conference championship. (I’m saying the Covid-abbreviated 2020-21 season didn’t happen.)

Saturday, in a change of schedule, the Potters play at Normal Community at 2:30. The Lady Iron are 20-6 overall, with a victory at Washington and a one-point loss to Peoria Central. A good test for the Potters before beginning regional play in 10 days (opening against Richwoods with that winner most likely playing Peoria High in the regional final).

Best of all on this Pink Night, through their fund-raising efforts, the Lady Potters were able to write a check for $22,000 to the Illinois Cancer Care Foundation.