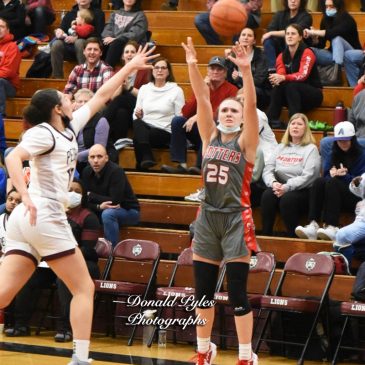 Win, you’re a regional champion for the seventh straight season and you’re headed to a sectional next week, still alive on the snowy road to Redbird Arena and a chance for a fifth state championship.

Lose, the season’s over. So where are you when it matters most?

Tatym Lamprecht had the ball in her hands at the free throw line.

To hear her tell it, though, the Lady Potters junior was not in the Peoria High gym with everyone else.

She was alone at the line in the Potterdome.

How did she know?

“I imagined I was at practice.”

Swish the first, swish the second, and seven seconds later, 11 second to play, there she was again at the free throw line. Swish one, swish two. And the Potters had beaten Class 3A’s #3-ranked team on its own court.

Jubilation, celebration, and other teenage frenzies ensued, so much so, and I promise you I have not seen this before, not even in the four seasons that his team won state championships — but, I aver, testify and swear up and down that Bob Becker, the Potters’ coach, took hold of the regional championship plaque, raised it high over his players’ heads, and then he, a Hall of Fame coach in his 23d season, began bouncing up and down as if suddenly 17 and at Sycamore High again.

Don’t you love when that happens?

“Ugliest, prettiest game ever,” Becker said. “Fifteen turnovers the first half and we were up by 10. These kids have been so resilient all season, through injuries, finding a way, making a way. Tonight, going from 10 up to 4 down and coming back at the end. Beating the No. 3 team in the state that had been No. 1, that had beaten us here six weeks ago.” Here, with beads of water shining on his suit coat (“Yeah, got me in the shower”), Becker remembered to stop talking in order to breathe. Now, going on: “These kids, so gritty, just such toughness.”

From there, once up by 10 and now down by 4, the Lady Potters showed who mattered when it mattered most.

Hobson two throws to close the gap to two points.

Next time down, freshman Ellie VanMeenen made a 3-pointer from the right edge of the arc. Her third 3 of the game, Morton’s only 3’s. About that game-turning 3, she said, “I was nervous at first, but as soon as the game went on, I wasn’t nervous anymore.” As VanMeenen spoke, Krupa bumped her on the shoulder and said, “HUGE 3!”

Then it was Lamprecht, controlling the ball against Peoria’s aggressive press, drawing back-to-back fouls for the game’s last four points.

I could go on about Lamprecht a bit. And I will. Twice she blocked Peoria shots in the paint, not the kind of work a 5-foot-7 guard usually gets done, and she had a perfect explanation.

Because Lamprecht had played two seasons at East Peoria, where the Raiders seldom won games, before transferring to Morton, where she has been an integral part of a regional championship team that now is 26-5, there was the inevitable question of what this season has been like for her.

Krupa led Morton’s scoring with 11 of her hardest-ever points, all while being double- and triple-teamed. VanMeenen and Lamprecht each had 9, Hobson 2.