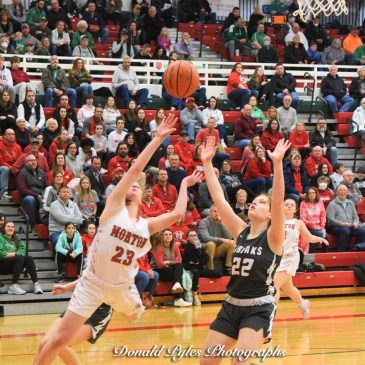 At the Winter Olympics, we saw people throw themselves off mountain peaks with bed slats strapped to their feet. They ski straight down at 80 miles per hour until they hit a snowflake crossways and go head over tea kettle and wait for an ambulance to pick up the pieces. Also, there’s that Big Air event. Kids go DOWN A GIANT HILL sideways on one ski until they go UP A GIANT HILL and fly into the sky doing cartwheels, only sideways and upside down.

As best I could tell, anyway. It’s terrifying, worrisome, and it keeps us on the edge of our seats in a state of high anxiety.

Kinda like the Lady Potters bringing the ball up-court.

They won easily tonight, winning by 24 over a team they beat by 19 a month ago. I say “easily,” and that’s what the score suggests, but anyone paying attention knows it might have been fun to be in the Potters’ locker room at halftime to hear if their coach, Bob Becker, thought it had been done easily. Morton led at halftime, 26-20, with the last three points coming on a Katie Krupa 40-footer at the halftime buzzer.

Until Krupa’s rainbow, the Potters had been half a mess with half of the mess the result of careless ball-handling, wayward passes, and unforced turnovers that caused Becker to rise from the bench, clasp his hands on his haircut, and walk toward the exit end of the gym where one witness (me) wondered if he might return with a bag of popcorn, the better to enjoy the evening.

“Very frustrating,” Becker said. His four state champion teams were models of efficiency. This team, not so much. This team reaches double figures in turnovers most nights. And yet the Potters are now 26-5 and are two victories away from another appearance in Redbird Arena’s Final Four.

“We’re overcoming it with defense,” Becker said. “The girls are fighting through this.” A senior, Maggie Hobson, said, “When we’re playing our game –turnovers are not our game — and we keep battling, we can beat anybody.”

They showed that in the third quarter against Galesburg. They stretched the halftime lead from six points to 18 points in 6 1/2 minutes. They allowed Galesburg one field goal in the quarter and led, 45-27, going into the fourth.

“Coach gave us a pep talk at half,” Hobson said. The Potters responded with the kind of run that transforms a struggling team into a dominating team. It started with a Krupa pass producing a Tatym Lamprecht layup followed 15 seconds later by a Lamprecht breakaway created by a Hobson deflection. The freshman Ellie VanMeenen, on a streak lately, added a 3-pointer, the third of her four 3’s tonight. Suddenly, Morton led, 33-22, and Galesburg never got closer. By quarter’s end, Lamprecht had scored eight of her game-high 17 points in the period. She also had the perfect explanation for how the Potters can fix the turnover thing. “Play better,” she said.

The victory moved Morton into the LaSalle-Peru sectional championship game where Thursday night they will play Washington for the right to advance to the Streator super-sectional.

Washington, old friends from down the road. Washington, with whom they shared the Mid-Illini Conference championship. They defeated Washington twice in the regular season and now are faced with the hard thing of beating a good team three times in a season. And Washington comes in off the thrill of tonight’s upset 61-51 victory over Geneseo, Class 3A’s #1 ranked team most of the year.