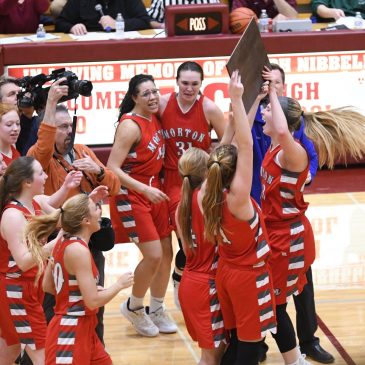 I said, “Be still, my heart,” and my heart said, “But how?” Fate had this one in her hands. Anything could happen. Three minutes to play. It might have been three hours. Young people could grow old, old people could grow young. Tides could turn, the moon could fall from the sky. “Be still, my heart,” I said, and my heart said, “I get it, I get it. Shut up, already.”

The Potters were down by eight until, suddenly, they are up by three with a minute and change to go. That minute and change might as well have been time without end. Hurry, Fate. Hurry, tell us what will be. Richwoods is a mighty force, undeniable in the last hour or day or month, however long it was that Richwoods owned this one. A minute and 29 seconds to play and the Potters are up by three, which is nothing in this moment, for Fate is fickle, we know. She can erase three points with a flick of a finger.

At the Morton bench, the Potters’ coach, Bob Becker, is crouched before his five starters. This night he is coaching like a man with his hair on fire. Early on, upset with a referee’s judgment, he did a Houdini-escaping-a-strait-jacket trick to get out of his suit jacket and throw the thing down emphatically. Later on, he had been so rambunctious that his tie hung sideways and his shirttail hung out the back. Now, he is crouched before his team, with 1:29 to play, up by three points. And, at the top of his voice to players a foot from him, in all-capital letters with an exclamation point, he tells Fate what she damn well can do tonight.

“THIS IS OUR FRICKIN’ GAME!” he tells his players.

Richwoods didn’t score again. The defending state Class 3A champions, ranked No. 1 going into this game, winners 30 times in 32 games – the Peorians managed only one shot in the minute, 29. It wasn’t so much that they failed. It was more that the Potters’ Lindsey Dullard succeeded grandly. She made two extraordinary plays. In fewer than six seconds, at :23.2 and :17.7, the 6-foot-1 junior got offensive rebounds on free throws to keep the ball in Morton’s hands. Then she made a free throw at :16.1 to give Morton a four-point lead.

My heart felt really good then.

We saw two of the state’s very best teams, whatever class you want to choose. Both teams had marquee players headed for Division-1 universities. Both played scrambling, unforgiving defense. Neither asked for quarter physically, neither gave quarter. More than once, a Morton player stepped over a Richwoods girl at her feet, and, more than once, a Richwoods player stepped over a Potter at her feet.

The difference came on offense. Morton was good from outside (six 3’s), Richwoods was good inside (only two of its 17 buckets came from more than point-blank range). But the Potters were also good in close. Their freshman star, Katie Krupa, led all scorers with 21 points, seven on free throws, the other 14 on power moves to the rim, scoring with either hand. Her opposite number, Richwoods’ all-state senior Cam Taylor, scored 17 points (a good night, considering that Becker chose to double-team her every move and begged/dared Richwoods to try to score from outside; it couldn’t.)

Morton led at quarter, 9-4, and at halftime, 22-17. Richwoods’ only sustained move came in the first five minutes of the second half. A 13-2 run in which Taylor scored six points gave Richwoods a 30-24 lead. It was during that run, with 4:17 left in the quarter, that Becker’s suit jacket came off his body and went flying over his assistant coaches’ heads. It was another full two minutes, though, before Morton scored, and Richwoods extended its lead to 34-26 with seven seconds left in the quarter.

Enough time for Courtney Jones to get the ball to Dullard near mid-court.

Enough time for Dullard to put up a shot.

A shot that was in the air when the buzzer sounded.

And in the net a heartbeat later.

It had been 13 minutes of game time since Dullard had last scored. She had been tentative shooting. She had fumbled away possessions. She had made passes that Richwoods intercepted. Then she banked it in from 40 feet. Instead of being eight down, Morton was five down.

“That shot got me going on the inside,” Dullard said.

Still, Richwoods led, 36-29, with under seven minutes to play.

Then Tenley Dowell made a 3 and Dullard followed 30 seconds later with another 3 and it had become a be-still-my-heart kind of game.

After a Richwoods free throw, Dullard found Krupa inside to tie it at 37-all. Twenty-seven seconds later – you may notice a trend here – Dullard made a 3-pointer from the left arc. Morton led, 40-37, with 3:50 to play. At 3:32, Richwoods made it 40-39 – and never scored again – largely because of Dullard’s two offensive rebounds that denied Richwoods two critical possessions in the last minute.

Those were big-time rebounds. As she stood in the middle slot on the left of the lane, Dullard saw that the Richwoods player to her left didn’t intend to box her out. So Dullard circled around that girl and into the lane. And – thank you, Fate – the missed free throw bounced high and to the right. Its flight gave the husting Dullard time to cross the lane and beat everyone to the ball. And fewer than six seconds later, she did it again.

Krupa was thrilled, too. “Everything we had to do all season, the running, the conditioning, the practices – it’s so worth it,” she said. Krupa’s 21 points came on the heels of a 26-point performance in the sectional semifinal. Her coach, Becker, said, “The sky’s the limit for Katie Krupa.”

There seems to be no limit on these Potters right now. They’re 30-3 for the season, the team’s fifth straight season with at least 30 victories. In those five years, the Potters are 161-13. Last year, you remember, Richwoods won this game and went on to win the state championship. There’s no reason to expect anything less from these Potters. They play Monday in the super-sectional at Coal Valley. My heart will be ready.