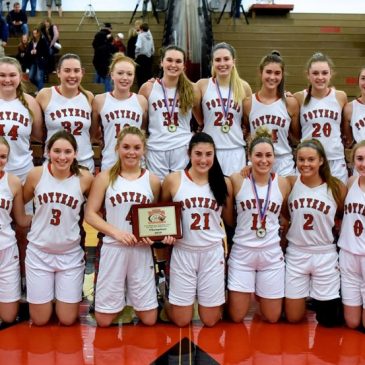 This is how fast Peyton Dearing runs.

First she’s standing in the backcourt, waiting to take an in-bounds pass. Then she’s . . .

The issue was in doubt with just under three minutes to play. There was a Morton timeout, the Potters leading 56-50, but uncomfortably leading. Once up by 13, the Potters now feel the heat of a Richwoods rally. So they have the ball in the backcourt, on the far side, away from their bench – and it comes in to Peyton Dearing, a little guard, 5-foot-5, who in the sunny months is a big-time soccer star but now, in the winter, takes the in-bounds pass at a spot maybe 60 feet from the basket.

And here’s what Peyton Dearing sees.

“I was open,” she said. Well, of course, she was open. Who guards a little guard taking a pass in-bounds at the other end of the court?

And here’s what Peyton Dearing knows.

So here’s what she does. She does that soccer thing.
“I’m fast and I’m open and I’m going to the goal.”

Only she has the ball on her left hand instead of her feet, and while the Richwoods people are in the gym, it’s as if they’re not in the same universe with Peyton Dearing, who is fast and open and sees the goal and is flying hell-bent for leather across the midcourt line, past the three-point arc at the left edge of the free throw circle where she tilts right and bends down the lane and toward the hoop, leaving a gobsmacked gaggle of Richwoods players asking . . .

In let’s say six seconds, from catching the pass to curling the ball off the board and into the hoop, Peyton Dearing has won the basketball game.

Yes, she did. It made the lead only eight points, with 2:40 to play, and Richwoods surely had time to come back. But not this time, not when they thought they had Morton stopped only to see the Potters transform an ordinary in-bounds pass into the kind of extraordinary play in which an opponent takes your heart out and stomps that sucker flat. Richwoods scored only three points the rest of the way and two were meaningless in the game’s dying seconds.

You gotta love Morton-Richwoods basketball. The Potters have won four of the last five Class 3A state championships. Richwoods won the other one. The last three years, either could have won it all. Morton has a state-champion look about it this season as well, and while Richwoods is a lesser team without its two-time all-stater Cam Taylor (now at Marquette University), its returning stars, Jaida McCloud and Nia Williams, know how to win big games.

Richwoods led this one early, thanks to its typically aggressive, scrambling zone defense and its quickness on the boards. But once Morton switched from a man-to-man defense to a variety of zones that shut down the Richwoods offense, it was inevitable that the Potters’ offense would control the game. The big names in that offense were Lindsey Dullard and Katie Krupa. Dullard’s 22 points came from inside and out, on slashing drives to the hoop, and on 3-pointers where she twice rose above Richwoods’ zone to hurl her daggers. Krupa’s 19 came on delicate, bruising work inside where she powered through Richwoods’ clawing defenders to finesse shots off the glass with either hand.

Four Krupa free throws and a Maddy Becker 3-pointer gave Morton a 7-0 run in less than two minutes of the second quarter. It gave Morton a 21-15 lead and the Potters never trailed again. They led at halftime, 32-24, and 51-40 after three.

Getting late in the fourth quarter, that 11-point lead fell to six when Nia Williams threw in a 3-pointer with 2:52 to play.

Did the Potters’ coach, Bob Becker, draw up a play for Peyton Dearing?

“No,” she said, smiling at the things that happen sometimes.

Maybe next time he will draw it up. Or maybe he’ll do what all good coaches do. Let the players play. For that was a player’s play. Catch it, keep your head up, see what’s in front of you – and if no one’s in front of you, do the Peyton Dearing thing. Just stand on the gas. If no one gets in the way, keep going.

Yes, there is that. And it was good. It was even sensational. But the other stuff was just as important, the other stuff being taking three charges (none called), taking an elbow in the jaw that knocked her flat (offensive foul), and eagerly participating on hands, knees, and ponytail in more than one mad scramble for a loose ball, not to mention a steal and nifty pass to Krupa for the third-quarter’s last two points.

I bring all that up because it was obvious that Dullard and Krupa would be all-tournament choices. Not so obvious was Morton’s third player on the all-tournament team. Peyton Dearing scored six points.

In the morning game, the Potters might have won by 100. Instead, Becker put his starters on the bench halfway through the third quarter. Morton led then, 54-26.