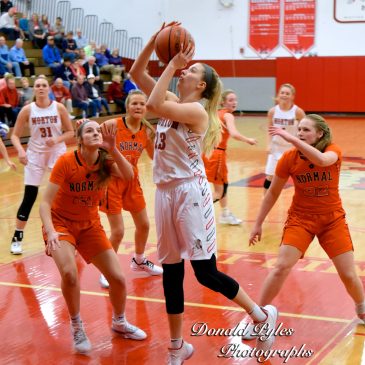 In addition to being big, strong, quick, and relentless in pursuit of good things at both ends of the court, the Morton High School Lady Potters are sneaky.

They’ll steal from you when you’re not paying attention. You think they’re just casually bringing the ball in-bounds from under their own basket. They’re not.

Next thing you know, they’ve tossed the ball in-bounds and somebody has dropped in a layup. One pass, two seconds, they’ve scored. They’re sneaky that way.

Four times tonight, they did it. Once in the second quarter, three times in the third.

It happens this way: A Potter is assigned to toss the ball in. She’ll stand a foot in-bounds until her four teammates get into their sneaky spots. Then the ball handler steps out and takes the ball from the referee.

She makes a pass. Takes two seconds, maybe three. And the Potters have scored. It happens so quickly you might miss it. It happens so easily you’d think the defense fell asleep. Somehow it all looks like a mistake when, in fact, the Potters planned it that way.

I asked the Morton coach, Bob Becker. “How many in-bounds plays do you run that you try to score on?”

“All of them,” he said. (Well, duh. The questions some sportswriters ask.)

Three examples of Morton’s in-bounds sneakiness came in the third quarter and they came at a good time. Suddenly, the Potters were in a little trouble. They’d sprinted to a 17-4 lead at the quarter. After that, refusing to fold on the home court of the undefeated defending state champions, Normal Community’s hustling, scrapping Lady Iron made it a game and trailed only 31-23.

Then Lindsey Dullard dropped in a layup off an in-bounds pass from Courtney Jones. A minute later, Dullard took a Katie Krupa pass and did it again. The third in-bounds layup, by Raquel Frakes, happened before your faithful note-taker thought to identify the passer. The sneak.

With those three easy ones, and with Dullard opening the quarter by peeling down the lane for a layup after a fake hand-off at the free throw line – shades of the great one, Brandi Bisping, who scored on that play maybe two dozen times in her Potters days – Morton’;s lead was 37-26.

At quarter’s end, it was 47-30, a comfortable margin by any measure – until Morton’s offense disappeared. In a nervous-making fourth quarter, the Potters did not score a field goal. They scored nothing for nearly five minutes. Normal Community’s 9-0 run moved the Iron with eight at 47-39. Finally, Krupa made two free throws at 3:19 and two more at 2:43. The lead was 51-39. Two free throws by Dearing moved Morton up, 53-41, with 36 seconds to play.

Later, breathing easily again, Becker said, “First and third quarters, good.” They were so good that in those 16 minutes the Potters were 36-13 winners – which means they lost the other half, 30-17.

A couple other numbers are interesting, too.

In Becker’s most important minutes, then, Morton had a 22-11 advantage.

“Maybe we didn’t have our best intensity all night, I don’t know,” Becker said, “but it wasn’t all our problem, either. We give Normal Community credit. They handled the ball well, they kept after us on defense. We just had a couple good runs on defense, like once we had six straight stops and scored on four of those possessions.”

The Normal Community coach, Marcus Mann, said, “Morton’s a great team, they’re big, they’re strong, they’re unselfish with the ball, they can light it up with 3’s. We like to play them because it always shows us where we are in competition with the best teams. After that first quarter, we came back and stuck with them. I’m proud of how we stayed in there tonight and fought to get back in it.”

Dullard led Morton’s scoring with 18, Jones had 13, and Krupa 12. Frakes and Dearing had 4 each, Makenna Baughman 2.

Now 5-0, Morton next plays at Canton on Friday night. Alas, I won’t be there. I’ll be in Washington, D.C., with a panel of sportswriters who couldn’t make things worse up there.