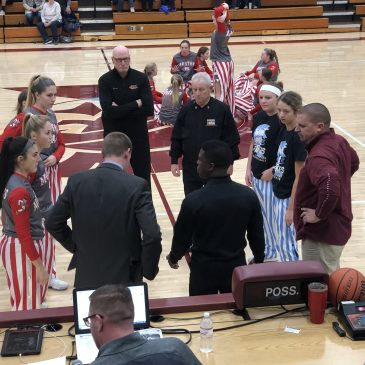 During pre-game warm-ups, I like to watch the other team. You can see which players can shoot. The ball comes off their hands easily. You can see the athletes, those girls who move with a kind of easy swagger that says, “Yeah, I can do this.” So I watched the St. Joseph-Ogden people warm up. There was one girl. She had an athlete’s body, an athlete’s moves. She put up 3’s with a flick of the wrist.

While her teammates loosened up without being seen, the girl did fancy stuff with the ball, quick-step fakes this way and that. She seemed to be working on crossover dribbles.

Isn’t that interesting, crossing over against … air?

I had two thoughts.

**She’s about to find out how good Morton’s defenders are.

Cutting to the chase: Bewitched, bothered, and bewildered by the Potters’ trapping man-to-man defenses, the girl spent most of the first half on the bench and did not score all night.

One small scene told a big story. She put up four 3-point shots in the third quarter. When the fourth bounced off the rim, she stood at the top of the arc and slapped her hands in frustration – and must have felt a tremendous rush of air as Morton’s Maddy Becker went sprinting past to take a long pass for an uncontested layup.

It was the kind of moment that moved the St. Joseph-Ogden coach, Kevin Taylor, to say, “Morton is what we want to be.” The Potters have won four of the last five Class 3A state championships. St. Joe finished third in last year’s Class 2A tournament. “Morton’s a good team with a lot of talent. Even with Division-1 talent, they’re unselfish with the ball. And they’re well-coached. It’s not fun getting beat this bad, but we scheduled them, last year and this year, because you have to play teams like that if you want to get to their level.”

Morton scored the game’s first 14 points in four minutes. At the quarter, it was 22-9. A 16-2 run in the second quarter made it 40-15 at halftime. In that third quarter, Morton outscored the hosts 20-2 for a 60-17 lead that made the fourth quarter a running-clock yawner.

But that third quarter, my my my.

Katie Krupa opened with a 3-pointer from the right arc. Katie Krupa? Yes. She is now 1-for-1 on 3’s this season.

Courtney Jones followed with a 3 and a layup off a nifty inside pass by Krupa.

Then a Peyton Dearing 3 and that Maddy Becker layup and a Jones steal/breakaway layup and Raquel Frakes scored the last five points on slashing layups and a free throw.

My Friday report featured commentary about “hair bands.” I come now to confess and clarify.

When I began to write last night, I didn’t know what to call that little elastic thing that basketball-playing girls use to bunch their hair into ponytails. I invented a term, “hair band.”

Well. Recognizing my flawed state of being – old and male – three women today tried to educate me.

One kept it simple: “Ponytail holders.” Another said, “Scrunchies,” to which I said, “????” A third declared, “They’re hair ties.”