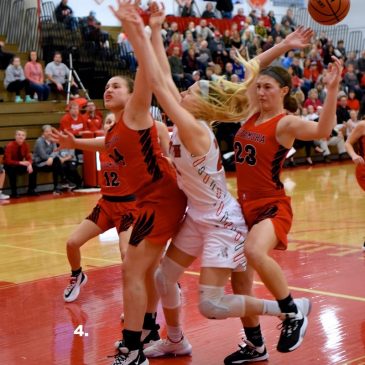 I don’t want to get all dramatic about it. But why not get all dramatic when this game was all-drama all-intensity all-the-time? So here’s the picture. The Potters’ Peyton Dearing had scored on one of her looking-for-daylight drives. And then she stole the in-bounds pass, only to fall, stretched flat-out face-down on the court. Here came a Metamora player from who knows how far away. She threw herself against Dearing, ker-RASH. In another game, that’s targeting a defenseless receiver, 15 yards, automatic first down. In this game, it was, like, Hey, Peyton, you alive under there?

“Unfazed,” her coach, Bob Becker, said. Easy for him to say. Not his ribcage.

“Got up, scored,” Becker also said.

She did it four freakin’ seconds later.

It was the Potters’ ball under the hoop. There they improvised a play. Courtney Jones was to in-bounds the ball until she said to Dearing, “Left side, you take it.” The left-handed Dearing could make the pass, step across the baseline on the low left block, take a return, and be wide-open for a left-handed layup.

Al McGuire taught us that some days are seashells and balloons. On those days, life is good. On those days, Peyton Dearing lobs an in-bounds pass to a double-teamed Katie Krupie near the free throw line. Krupa snatches the ball high overhead and immediately snaps it back to Dearing, who, as if materializing from nowhere, even dramatically materializing, simply steps in-bounds for the uncontested layup.

It’s too dramatic to say those plays decided the game.

But, look. They decided the game.

I’ll explain that later. Here I need to quote Bob Becker at a greater length. Perhaps you, even from the cheap seats, heard him this night. For reasons lost in the mists of history, Becker has a thing about Metamora. As much as he wants to win every Mid-Illini Conference game – the streak is at 53 in a row now – he really really really wants to beat Metamora. For 32 minutes, the Hall of Fame, four state-titles-in-five-years coach who now has won 498 games in 20 seasons was coaching as if he had never won a game and might never win a game and might have to go back to being somebody’s fifth assistant defensive secondary coach also in charge of lining the field on game days.

(THE STRONG LEATHERY SOUND OF A FOOT STOMPING)

And then there was whatever sweet nothing he laid on the zebra who T’d him up with two minutes to play, Morton leading, 46-27.

“Peyton just got HAMMERED on a drive and he didn’t call it, HAMMERED,” Becker said later. “I don’t even care about the technical. She got HAMMERED and I’m going to defend her.”

They came at the end of a 10-minute run. Moving from one point ahead to 14 ahead on its way to 20 up, Morton showed Metamora what would happen the rest of the night. What would happen is the same thing that happens to most people with the idea they can hang with the Potters. They learn they can’t. They can’t because Morton’s offense is so good it almost as good as its defense. Metamora is a good team. It came in with a 13-5 record. Yet it could score only 4 points in the second quarter and 5 in the third. Meanwhile, Morton blew out to a 46-26 lead.

There’s a word for this. Becker had scrawled it on his coach’s whiteboard as a reminder to his players.

Before Dearing was crushed against the floor, she had just scored on a drive. Then she made a steal. Her easy bucket on the ensuing in-bounds play – two layups in four seconds! — was the end of a 12-1 run that gave Morton a 27-14 lead. It’s worth doing play-by-play of that run, for two reasons: 1) good teams find a way to do such sustained work every night out, and 2) the Potters did it without their season’s leading scorer, Lindsey Dullard, who suffered a concussion on a fall when fouled in the first quarter and never returned to the game. (She may miss Tuesday’s game at Dunlap.)

The run started with an Olivia Remmert rebound and coast-to-coast sprint to a layyup. Then came Dearing with a flashing drive around, behind, and through Metamora’s befuddled defenders. She followed with two free throws and Jones came with a floater in the lane. At halftime, then, Morton led, 23-14.

Becker insists that Morton dominate the early play of every third quarter. That’s when Dearing did her two-layups-in-four seconds thing. The Potters ran the score to 38-19 at the third quarter’s end when Dearing, feeling the game come to her, did a catch-and-shoot 3 from the low left corner. “No thinking,” she said, no pain in the smile here. “We all know that with Lindsey out, we’d have to step up. We did. And our defense was stellar tonight.”

Sent from my iPhone