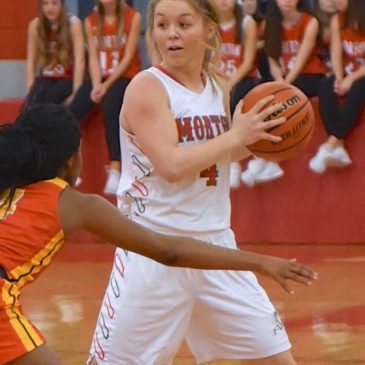 What to say about Courtney Jones?

Let’s go to the notebook.

Some translation may be necessary. CT is short for Court, short for Courtney. RE is rebound, 3 is a 3-point shot, l is the left side, 8’ is distance of shot, r is right, lu is layup, x-ct is cross-court, blox is blocks.

Sorry to put the dear reader through that code work. But it’s necessary to show as quickly as possible that Courtney Jones did some of everything all night long in a game that was up for grabs until Jones grabbed it in the fourth quarter.

Everywhere you looked, everywhere the ball went, there was Courtney Jones flying. “She was all over the entire 84 feet by 50 feet,” coach Bob Becker said. Yea, verily, the Potters 5-foot-7 senior point guard gave a master class in How to Play the Game. On defense, she was stealth weaponized – deflecting passes, forcing bad passes, seeming to know before Rock Island knew where it would next throw the ball. Offensively it’s Jones’s job, which she does exceptionally well, to control her team’s pace and movement. On this night, she also led the team’s scoring with 16 – the most important 9 coming in the fourth quarter, all coming after Rock Island had moved within four at 33-29 with 6:05 to play. That this was a game should have been no surprise.

Rock Island came to Morton having won 19 games, their last nine in a row. The Rocks came to town ranked 11th in the Class 3A poll. They came with a proud basketball history. These people were not cupcakes of the sort that would fall to crumbs, even against the Potters, ranked No. 1 and winners of 24 straight.

The ball found Jones deep in the right corner.

She had a thought that she explained later.

The yeller-in-chief is Becker, who, yelling at Jones from time to time, had suggested/ordered/tough-love-coached-her-up to shoot anytime she had a good look.

The time had come.

As tenuous as a 4-point lead feels, somehow a 7-point lead in the fourth quarter feels like . . .

“You breathing again?” assistant coach Bill Davis later asked the notekeeper in the row behind the bench.

“Started at 3:50,” I said, noting a time that Raquel Frakes – welcome back, Raquel – made a nifty entry pass to Katie Krupa for a layup and the Potters’ second 7-point lead, a lead that soon grew to 11 with a minute and a half to play.

Breathing, it felt so good.

It hadn’t happened much since the first 3 ½ minutes of the game. Early on, Morton was as good as Morton gets. It ran off to a 14-0 lead. Working nicely in the paint, Krupa scored the game’s first nine points, the last two off that long Jones pass out of a rebound. Then Jones added a 3 from the left side and a put-back of her own missed layup.

Rock Island kept it close with man-to-man defense so aggressive – hands clawing, bodies bumping – that Morton found it difficult to run any offense smoothly. Even the usually indefatigable Jones said, “It was one of the most up-in-you games ever. I’ve never been that tired in any game.”

Jones’s tour de force tonight was not her first in the last month, or even her best in the last month, but it may have been the most important in showing the Potters they can “find a way” – to quote Becker’s coaching mantra – to win against good teams no matter the circumstances. Tonight Maddy Becker did not play – that knee. Lindsey Dullard did not play – she returns next Tuesday. Raquel Frakes played for the first time in a month and profited from her time in the fire again.

So I said to Jones, “You’ve been so good lately,” and then I began taking notes furiously, which is to say I took notes that are now unreadable, because when Jones starts talking, she talks really really fast, so it comes out looking like….

Got that, dear reader?

“If I hadn’t played against great players like that,” she said, “I wouldn’t be the player I am.”

So I go to the yeller-in-chief again to inquire about the wonderful Ms. Jones.

“What a motor,” Becker said. “Courtney’s not a flip-switcher who turns it on and off. It’s never off. She has a competitive fire second to none.”

And, gee, she talks fast.

“She does EVERYTHING fast,” the coach said. “More than once, she has gone to her car, turned on the ignition, and realized she had to come back inside. She just left the car running and went back out.”

Becker laughed. “True story,” he said, as if anyone had reason to disbelieve it.