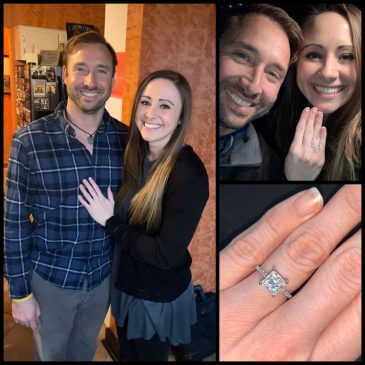 During the jayvee game, Brooke Bisping sat alongside Bob Becker. The assistant coach sat alongside the head coach as she had sat alongside him a hundred other times. Just casually. Leaning toward him, as if to better hear what he had to say. She let her left hand dangle across her right wrist. Occasionally, she lifted that left hand toward the coach. One time she made a fist with that left hand and punched the air in front of the coach’s face.

As Bisping moved her left hand to and fro, a light seemed to flash from that hand.

A glint. A sparkle. You might even call it a diamond’s twinkle.

From two rows behind Bisping and Becker, I recognized the source of that light. Here I violated several journalistic stay-out-of-the-story rules by suggesting to Bisping, with a gesture or two, that she stand in front of Becker and use her left hand to scratch her nose with the ring finger of that hand.

She did that. Her face was alight with joy. Such fun she was having.

And here’s what Becker did in response.

He scratched his own nose.

He thought to brush away whatever Bisping had seen there.

So she did it again, the scratching thing. Only this time she moved from scratching to waving the ring finger in the light, and now Becker, finally pulled out of his basketball bubble, saw Bisping’s fingers moving and he saw the twinkle and he understood what it meant and he laughed out loud. Then, more loudly yet, and in agreement with every woman who has ever considered men clueless, the coach said, “I’M AN IDIOT!”

After which he rushed to embrace Bisping, and what a wonderful moment that was, 16 years after the freshman Brooke Bisping became a rising star on the first of Becker’s dominant Lady Potters’ teams, ultimately the leading scorer in Potters history and now Becker’s assistant on four state championship teams.

“Nothing real dramatic,” Tommy Rush said. “We’d been watching ‘Star Wars’ on TV.” He is a resident physician in radiology at OSF Hospital in Peoria. For most of three years now, he and Bisping have been a couple. “I took the ring out and said, ‘Will you marry me?’ She said, ‘Are you proposing?’ I said, ‘Yes,’ and she said, ‘Yes, yes, yes.’”

We’ll get back to the ring at the end of this, but this is a basketball blog, after all, and we ought to talk about basketball a little, although the Potters did to Metamora tonight what they’ve done to most everybody all season. Allowing nothing on defense, doing everything on offense, they ran up a big lead early, 21-6. When Metamora thought to rally late, the Potters ran away and hid; in the fourth quarter, they stretched a 10-point lead to 27 points in 4 minutes and 8 seconds of play.

Let’s go there. Metamora came in with a 17-5 record, 7-3 in the Mid-Illini Conference. It might have thought it had a chance tonight when it outscored Morton 9-2 in two minutes and trailed only 47-37. But, really. Metamora had no chance. It had scored four cheap-o buckets in the last minute of the third quarter and early in the fourth – just enough to get the Lady Potters’ attention back on the task at hand.

Lindsey Dullard, playing with four fouls, slashed to the rim for two….Peyton Dearing, a demon on defense, perhaps subjecting Metamora’s poor, poor point guard to nightmares for the rest of February – “I give her an A+, Peyton’s the best on-the-ball defender I’ve seen,” Becker said – and she can play with the ball as well, following Dullard’s layyup with a 3 from the deep right corner.

Katie Krupa ran the score to 54-37 with two free throws, then her fellow sophomore, Maggie Hobson, knocked in a 3 and layup off a
Courtney Jones pass in the paint….Dearing followed with a second 3, her third of the game….Jones dropped in a mid-range jumper .. . and Dearing carried a Dullard pass in for a fast-break two.

And Morton now is 27-0, on a 37-game winning streak reaching into last season. And it is 10-0 in the Mid-Illini Conference, on a 57-game winning streak there. And in the last five seasons and this one so far, Morton is 191-13. (Causing me to tell a friend the Potters are “the UConn of the heartland.” Sort of, anyway. In the same time period, UConn is 198-7. Close enough for me.)

In the locker room afterwards, as the coach, Becker, reviewed the game, senior forward Makenna Baughman noticed a glint, a sparkle, a flash of diamond’s light on the left hand of the assistant coach, Bisping, and Baughman, being a young woman and not a clueless man, immediately whispered to Olivia Remmert, another senior, “Is that an engagement ring on Brooke’s hand?”

Which caused Remmert to take one look and shout, “OH, MY GOODNESS!”

That was the end of the Becker review because Remmert bounced over to Bisping, raised her hand high for all to see, and there ensued such a hullabaloo of celebration that when Bisping later returned to Tommy Rush’s side, she said, “THEY WERE ALL SCREAMING…and I think I’m deaf now.”