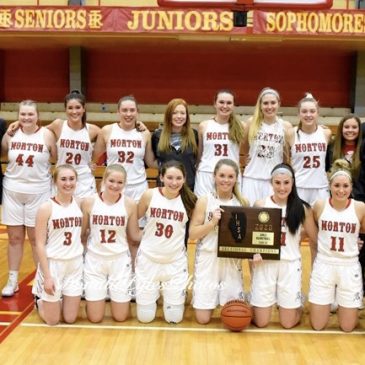 So I looked Peyton Dearing in the eye.

I tapped her left shoulder.

“What I’m about to say,” I said, “I say with admiration and respect.”

I said, “You are one tough little sweetheart.”

Strike that “sweetheart” word. My word did begin with an “s.” And it did end with a “t.” And you, dear reader, are free to fill in the two letters in between.

No news in that, of course, for we have seen Peyton Dearing do things that put her in situations where the only way out is to stand your ground and take the heat and . . .

Well, here, look at Dearing in the paint. Morton led, 46-43, with 5 minutes to play. Anybody’s game. Terrific game. A defensive war at both ends. A heavyweight fight even. You dare not blink for fear of missing the knockout punch. You do not breathe without wondering how long it had been since you last breathed.

And here came Dearing, flying downcourt with a steal. Wide-open layup. Except she had flown too far. Her layup struck the underside of the rim.Now the ball was loose. A mad scramble. Bodies tumbling around Dearing’s feet. Maybe somebody knows how many people lunged for the basketball, slapped at it, fell trying to corral the damn greased pig. Maybe somebody who is not me knows how the ball got to Katie Krupa near the free throw line. And those who saw Krupa with it thought she was going up for a 12-foot jumper.

“I thought so,” Dearing said.

Until she saw Krupa pass it to her.

The little guard was standing right where she’d missed the layup, and here came the ball, and what she did then was what tough little sweethearts do. She took Krupa’s pass, standing in the mess of people at her shoelaces, and from four feet banked it in.

Peoria Central, for all its good work, had not shown it could sustain any offense against the Potters’ defense. Only once all night did it score as many as six straight points. Allowing Morton a five-point lead with fewer than five minutes to play put Peoria Central in deep trouble. After Dearing’s bucket, Morton coach Bob Becker switched his defense from man-to-man to a 2-3 zone that baffled the Peorians so completely they were reduced to flinging the rock at the rim and hoping something good would happen. Nope.

Did I say it was the closest 20-point game ever? Absolutely. It was 44-43, Morton, with 5:46 to play. The lead had changed hands eight times, twice in the first two minutes of the last quarter. Anybody’s ballgame, right?

Becker’s whiteboard carried a pair of pre-game reminders that spoke volumes later. “POISE – COMPOSURE. GRIT-COMPETE.” Against a Peoria Central team that is a perpetual-motion machine of aggressive play at both ends, it’s easy to lose poise, easy to yield to the pressure. But when it mattered most, the Potters said emphatically, “No. No, never. Honestly, never at all.”

Instead, they went on a 19-0 run to turn a one-point lead into a 20-point blowout. This was good stuff. If we call it a heavyweight fight, that 19-0 run was Muhammad Ali closing the show, dancing, leaving no doubt..

The run began this way: Dullard from 15 feet, Dearing on that 4-footer, Krupa a layup off a Hobson rebound and a Jones 30-foot pass.

Then: A Krupa power move, two free throws and a layup by Dearing, another Krupa free throw, four Dullard free throws, and with 11.8 seconds to play, Olivia Remmert found herself with the ball on the low right block. By then the issue was settled and Morton had been backing away from shots. With 11.8 seconds to play and her team 18 up and no one near her, what’s a defensive specialist to do?

So she banked it in.

Oh, one more thing. That sweetheart thing. I mentioned it to Bob Becker.

The coach said, “They all are.”

Dearing’s 19 led Morton’s scoring. Dullard and Krupa each had 14. Jones had 8, Hobson 6, and Remmert her unquestioned 2.