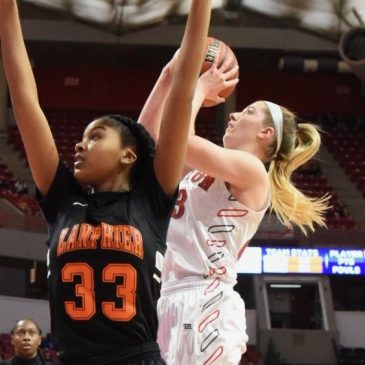 Now, one more. The Potters are 37 and 0. One game left. One for a state championship. They’ve chased it all season. Four state championships already and they’re knocking on history’s door. No one in their class has ever won five. Only one has ever been 38-0. Who was it, the old football coach Bum Phillips who said his guys wouldn’t knock on any stinkin’ door? “We going to kick the (profanity) in,” he said.

But who wants easy in March? November maybe, even January. But the stuff that gets a team through February – Bob Becker calls it “toughness, grittiness, resilience” – is the stuff a team needs more than ever on the first weekend in March when the Illinois girls high school basketball season ends in Redbird Arena.

Tomorrow, when Morton plays for the Class 3A state championship, the Potters absolutely, positively, certainly, and sure as (profanity) will need their best stuff.

That’s because today’s victory over Springfield Lanphier means the Potters’ one more game, one last game, is against the best team they have seen this season. Chicago Simeon is 33-3 overall. The Chicagoans are big and strong up-front, 6-foot-1, 6-2, 6-3. Their defense is a wide-spread 2-3 zone reaching nearly sideline to sideline. Simeon’s offense stars all-stater Aneesah Morrow, who scores 27 a game, inside and out. Mostly, it relies on full-frontal attack. They run at the rim, throw up a brick if they must, chase it down, and throw it at the glass again. They’re good at it. They beat four-time state champion Lombard Montini today, 48-40, because they had 20 offensive rebounds and won in the paint, 28-16.

Becker watched that game. Later, asked what he thought of Simeon, the coach said, “Daunting.”

In Morton’s first 12 minutes today, the Potters were as good as they must be tomorrow. They quickly ran out to an 11-2 lead. A little later came a 12-0 run that put them up 27-14 midway in the second quarter. At that point, Morton looked every bit the efficient offensive and defensive team it has been all season. At halftime, Morton led 31-20. Its own all-stater, Lindsey Dullard, had scored 17 of her game-high 23 points. Becker later called her performance “a big-time game by a big-time player.”

But after those early minutes of smooth success, the Potters stumbled. Becker credited Springfield Lanphier with tenacious defense, which is a kind way of saying the losers had good athletes who made up in frenzied activity what they lacked in fundamental skills. But even as Morton built a 35-20 lead early in the third quarter, the game devolved into a hectic mess only occasionally interrupted by someone’s brief rally.

Morton scored six points in the third quarter, two in the last five minutes. Lanphier won the quarter, 9-6. Morton won the fourth quarter, 11-7, meaning the second half went to Morton, 17-16. There came a point, however, when everyone suddenly came awake. Scarily to the couple thousand Morton fans in the arena, Lanphier closed within five at 39-34 with 6:07 to play.

To the rescue came Becker’s friends Toughness, Grit & Resilience. Morton allowed Lanphier 13 offensive rebounds. It went 2-for-12 on 3’s (0 of 6 in the second half). So the Potters needed all of TG&R’s help, most of it coming from defense that forced 23 turnovers, 14 in the second half.

No sooner had Lanphier threatened late, Morton settled the issue with a 7-0 run. Dullard began it with a pair of driving layups, Olivia Remmert followed with a free throw, and Katie Krupa powered her way to the rim. It was 46-34 with 3:48 to play. Courtney Jones’s two free throws with 1:27 to play were the game’s last points.

Now, for the Potters, time to kick in the (profanity) door of history.