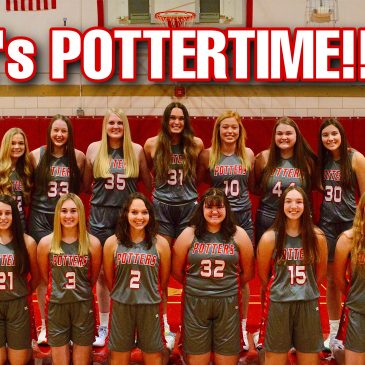 Eight days short of a year, the Lady Potters returned to the Potterdome this afternoon. They last played at home February 14, 2020. Their subsequent run at an undefeated season ended in a one-point loss on the winner’s last shot with 2.5 seconds to play in the state championship game on March 7.

Then came the virus and masks and social distancing and remote learning and telecommuting and a world of pain and death.

So, with the virus making the rules, there were only 37 people in the bleachers today. I counted ‘em at halftime. It was a downbeat homecoming. As it turned out, with 1:18 left in the first half, the Potters had enough points to win without scoring again. Katie Krupa had converted a long Raquel Frakes pass into a three-point play to give the Potters a 27-6 lead over the same team they’d had down 27-5 the night before.

Anyway, the Krupa three-point play came late in a 19-0 run that gave the Potters a 33-6 lead. Krupa did the best work with Frakes her wingman. Paige Griffin made a 3-pointer. Addy Engel, a starter as a freshman, scored on a fast break.

The last 12 minutes, with the starters on the bench, the Potters were outscored, 19-4, even as they recorded a 63d straight victory in the Mid-Illini Conference.

Krupa played less than a half and led Morton’s scoring with 15. Frakes had 13. Maggie Hobson and Griffin each had 3, with 2 each by Engel and Faith Hostetler (who climbed only three rows this time to deliver Milk Duds).

This is the strangest, darkest, most unsettling of years. We have lost so much that was so long familiar. Then the Potters gave us a gift. They played a game. We had not seen them for 333 days. More important, THEY played a game. They had practiced together for less than a  week. At last, they had a chance to become a team.

Now they’re 2-0 with a dozen games to play and it’ll be fun to see them create their own identity in a year of enforced isolation and remote learning and no games and no practice.

So at 2:22 I decided to make a couple edits to the game story. They’re not changes of fact but of tone. Yesterday’s words didn’t fit the joy that high school athletes feel when every trip down the court is a trip toward possibility, joy in these days so long without joy.