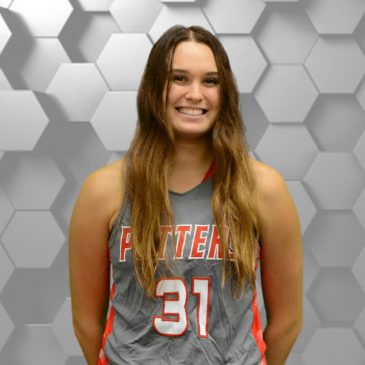 At 7:19 p.m. tonight, the Potters’ point guard, Katie Krupa, idled near the top of the key before starting the ball in motion to the left side. Before you knew it, she was taking a pass on the right side and moving with the ball into …

Krupa, the 6-foot-2 junior, the Potters’ big’un in the paint the last two seasons?

Yes, point guard Katie Krupa was moving with the ball across the lane at some speed when she looked up and saw the problem . . .

She’d put herself in an awkward spot, going up even as she floated past the hoop. It seemed too late to put up a decent shot. Too awkward, for sure, the rim now behind her chosen flight path. Big’uns who are freshmen or sophomores clang that one off the iron. But Katie Krupa, junior point guard, knew where she was and what to do. Awkward became graceful. A 5-footer, softly. I made a note: “Pretty. Athletic.”

It’d be fun to see what this team would do in a normal year. Give it 35 games, it might belong in the company of Morton’s last six teams – teams that won four state 3A championships, finished second another time, and went 201-14. We’ll have to be content in this abbreviated Covid-19 season, with no state tournaments, to see if this team can do what it suggested tonight it could do – go undefeated in 14 Mid-Illini Conference games for a fifth straight season..

Certainly, Canton was no problem. Morton was dominant at both ends. It was 21-3 after a quarter, with Maggie Hobson making two 3-pointers, Krupa scoring twice in close (nice work from the point, eh?), and Raquel Frakes persisting inside on drives and rebounds for four free throws (nice work after ACL surgery, eh?) The lead was 31-5 at halftime and it wasn’t that close.

One takeaway from this night: Katie Krupa, one game in, will soon belong high on the long list of point guards who have made the Potters so formidable for so long: Tracy Pontius, Mariah Nimmo, Kait Byrne, Emma Heisler, Josie Becker, Courtney Jones.

So, Ms. Krupa, this point guard thing – you like it?

“Definitely,” she said tonight. Coach Bob Becker’s decision to move Krupa from the paint to the point didn’t surprise her. She has shown she can handle the ball and shoot from anywhere. Besides, as Becker has said, “You want the ball in her hands,” so why not put it in her hands to start every trip downcourt? Krupa, smiling: “He’s a smart coach.”

Speaking of smart, can somebody help the dummy typist? I held my breath many times tonight. Not that we were witnessing great drama. Because my glasses kept getting fogged up. What is it, 10 months of masks now and my only defense against Glass Fog is to quit breathing. And that doesn’t seem a reasonable solution. Other suggestions are welcomed.

By the way, in this Covid-season opener with Covid rules in place, I counted 26 spectators in the gym, all wearing masks. All players were masked. One referee wore a mask below his chin, apparently to make room for his whistle. (The other refs had whistle-accommodating masks. Such a world.)

Hobson led Morton’s scoring with 14, Krupa had 8, Frakes 7, Sedona McCartney 5, Abbey Pollard 3, with 2 each from Cailyn Cowley, Paige Chapin, Addy Engel, and Faith Hostetler (who also delivered a box of Milk Duds 13 rows up in the bleachers).