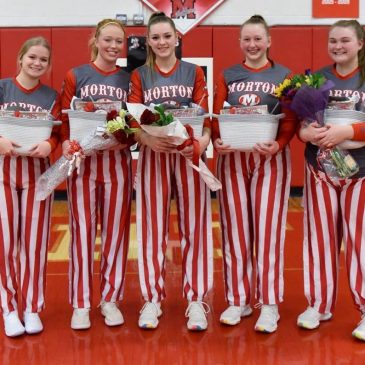 With 53.5 seconds to play, Claire Reiman stepped onto the court. She took a couple steps too many. So the Potters’ coaches said, “No, no, stay right here,” and they pointed to a spot just inside the out of bounds line about a foot from the bench. There she stood as Limestone ran past her with the ball.

Then, with 51.1 seconds to play, Claire Reiman stepped off the court and her teammates rushed to hug her.

Those were Claire Reiman’s happiest 2.4 seconds of the season.

She’d torn up a knee in a summer game. Surgery precluded her playing at all in this season, her senior season. But in the last minute of a Seniors Night game that the Potters would win easily, coach Bob Becker wanted Reiman on the court. Not to play, but to be honored. As there were 14 Potters at the start of this strange season, there would be 14 at the end.

“Amazing,” Reiman said later outside the Potters’ locker room, and her voice broke, “to be on the court,” and tears came to her eyes. She spoke in a whisper behind her mask. A man taking notes waited a while and asked if she’d repeat what he hadn’t heard well. “Amazing,” she said, bright-eyed and smiling, “to be on the court with my teammates.”

There was never a chance that Morton (11-3 in the regular season) would lose to Limestone (2-12) in this first-round game of the Mid-Illini Conference tournament. For a half, though, there was every chance the Lady Potters would embarrass themselves by playing poorly against a Limestone team that dressed only six players, having left five at home in Covid quarantine.

Well, so what’s Becker say to his players in the locker room?

Not much. He’d seen his players flat and dull, no one showing any signs of energy or enthusiasm. No sense talking X’s and O’s to people going through the motions. (9 points in the first 12 minutes???) “So I asked the team, ‘What are your thoughts?’”

Raquel Frakes, one of the team’s five seniors, had thoughts. “I said, ‘They’re getting offensive rebounds, they’re making hustle plays, they’re out-working us.’ It was a loss of our culture.”

Fix it they did. Coming off the second quarter’s 11-2 run, they opened the third on a 13-3 run. Addy Engel began it with a free throw, Frakes added a layup, Graci Junis a 15-footer, and Katie Krupa the last eight points. In those nine minutes, Morton outscored Limestone, 24-5. (More like it.)

In tomorrow night’s semifinal, Morton plays Metamora, which comes in on a seven-game winning streak, including tonight’s 44-26 victory over Canton. The Potters have beaten Metamora twice this winter, neither time easily.

“They’re physical, aggressive, and talented,” Becker said. “We can’t play just a half of basketball.”

Oh. Wait. I didn’t mention tonight’s national anthem singer. Every Seniors Night for a long time, assistant coach Bill Davis did it. Then he went and retired from coaching to his day job, delivering mail in Bloomington. But there he was tonight, happily in full voice, and I asked if he’d been practicing for his Sinatra-like comeback.

“I haven’t sung it since last season,” he said, “except for three or four times in the mail truck.”

Krupa led Morton’s scoring tonight with 13. Frakes had 12 (two with a spin move in the paint and layup with her off hand that caused Old Coach Davis to say, “Vintage Rocky!”) Paige Griffin scored 8, Junis 6, Maggie Hobson 5, Cailyn Cowley 4, Engel 3, and Sedona McCartney and Paige Chapin 2 each.